Demon Slayer -Kimetsu no Yaiba- The Hinokami Chronicles is an incredible mouthful of a videogame title, but SEGA’s recent fighter is one of the best in its genre thanks to a stellar audiovisual presentation and solid gameplay. We tested it out on a PlayStation 5.

Anime series are a popular source of inspiration for anime fighters, and they’re (mostly because of DBZ and Naruto) been around for a while too. The development team behind Demon Slayer: Kimetsu no Yaiba – The Hinokami Chronicles, CyberConnect2, have a long history in the genre as well – working on countless Naruto titles as well as last year’s Dragon Ball Z: Kakarot. Demon Slayer feels like one of the freshest takes on the genres in years though, despite the fact that is has a similar focus on a narrative-driven story campaign to support the 3D fighting – like Kakarot did. 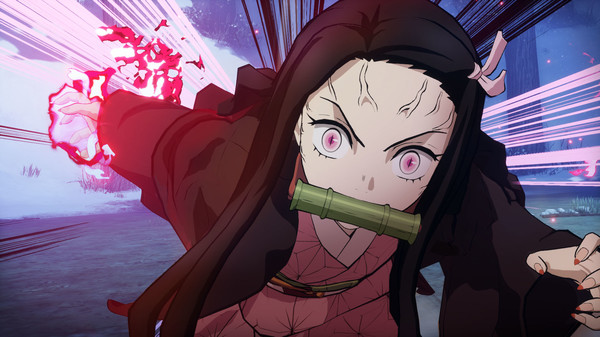 A lot of that is due to the excellent use of the source material in the game. Demon Slayer is acclaimed and popular, but far less widespread than Dragon Ball Z is. That allowed the development team to make an impact here, which they’ve clearly done. The story is packed with cinematic flair, cutscenes and story exposition to help introduce newcomers to the game world while at the same time providing the kind of richness that long time fans will expect and appreciate. There’s a good bit of crossover between events of the anime and things that are exclusive to the game too, so the story will appeal to anyone with an interest in following Tanjiro Kamado’s journey towards becoming a Demon Slayer.

In an effort to break up the sometimes lengthy story sequences, Demon Slayer -Kimetsu no Yaiba- The Hinokami Chronicles uses quick time events. It’s a rather dated mechanic, but luckily most of these (provided you are constantly paying attention) are forgiving enough to not become frustrating. The presentation of these sequences is consistently impressive though, and feel like they were lifted out of the anime – a feeling that also translates well to the in-game fighting.

The actual fighting is less groundbreaking than the presentation layer, but perfectly functional and easy to grasp, especially for anyone who’s played one CyberConnect2’s games before. Attacks can easily be combined into combos, while a parry system adds a layer of combat tactics to the battles – especially when facing some of the bigger foes. They’ll usually have very powerful attacks, and learning how to see them coming is crucial in effectively using the parry system in order to deal great amounts of damage. There’s a steep learning curve to the system though, which relies on expert timing if you want to get it right – something that can frustrate players who are more prone to button mashing their way through games like this. Demon Slayer doesn’t reinvent the genre, but is competent at what it does.

For added lasting appeal, Demon Slayer has a versus mode that you can play outside of the main campaign, but the bulk of the roster doesn’t get unlocked until you play through the lengthy story campaign first. The story is the highlight of the game so that’s not an issue right away, but if you ever reinstall or lose your save game, it’s frustrating to have to go through the entire story just to play a few versus games with friends locally or online.

As a blend of anime and videogames, Demon Slayer -Kimetsu no Yaiba- The Hinokami Chronicles is an audiovisual feast and benchmark for the genre. Its gameplay isn’t as groundbreaking, but playing through the story is still a blast thanks to its excellent delivery.