Star Trek Prodigy: Supernova is Outright’s video game adaptation of the animated Nickelodeon TV show by the same name. It’s out for all major systems – we took a look at the PlayStation 5 version to see if it can draw youngsters into the Star Trek universe without alienating long time fans.

Developed by Tessera Studios, it will come as no surprise that the game – like the show – is geared towards younger players, though it’s for a slightly older crowd than some of Outright’s other games like Peppa Pig and Paw Patrol. It ties into the events of the (first season of the) show, and does so with a cast of characters voiced by the TV voice actors – which is certainly a nice touch. Even Katherine Janeway gets voiced by Star Trek veteran Kate Mulgrew, which older fans will certainly appreciate. What’s a little weird is that the subtitles don’t match what’s being said though, but I don’t know if that’s a localization issue or just an oversight. 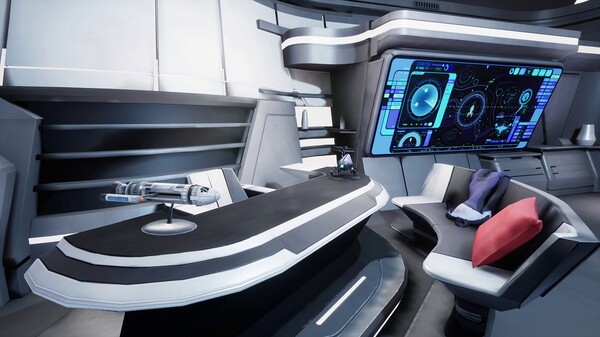 Star Trek Prodigy is about a group of youngsters who escape imprisonment and find a new home aboard a Federation ship – one that happens to be able to train them as Federation cadets, which before long leads to them going on missions. For an Outright title this one is quite story driven, but I was able to follow along just fine not having seen the show. Playing with my nine year old son I learned that there are quite a few references to the show here though, so fans of Prodigy will probably appreciate the story even more. Those who aren’t familiar, but like the franchise as a hole, will love the reference to all kinds of (familiar and obscure) elements from over 50 years of Star Trek – and I’m sure I missed plenty of them.

The actual gameplay unfolds like a top-down action adventure with a mix of combat and puzzles, in which you play as Dal and/or Gwyn from the show. You can actually control both as a single player by switching between them, but it’s even more fun to play in local co-op with another player. And although you can blast through each level in a linear fashion, it’s more fun to explore and find the various optional secrets that can be found. In addition, the crystals you find can be used for upgrades that you buy from fellow shipmates that you rescue while on a mission – I suppose their gratitude only goes so far.

The puzzles are a lot of fun, with plenty of diversity and a good learning curve to them. Early ones are about simply connecting an energy beam, but new mechanics are gradually added and later puzzles rely more and more on cooperation, which make Star trek Prodigy: Supernova a great fit for parents looking to play something with their kids. By comparison, the combat gets kind of repetitive after a while, at least for older gamers who’ll quickly start to recognize the same enemy types and attack patterns. The developers have given plenty of attention to recreating the look and feel of the show from an audiovisual perspective though, because in addition to the voice acting the art also looks the part.

That ultimately makes Star Trek Prodigy: Supernova a great game for long time Star Trek fans to enjoy together with their kids – not too unlike the TV show. With fun puzzles and a solid co-op mode, this is an easy recommendation for those looking to enjoy some family-friendly Star Trek adventures together.