It’s the season of VR for Bethesa. After the release of Skyrim VR just a short while ago and with Fallout 4 in VR on the horizon, we’re now reviewing DOOM VRF on Playstation VR.

Of course, the arrival of VR into mainstream gaming had everyone saying how likely and wonderful it would be to play first person shooters this way. The reality, however, is that we haven’t seen that many of them – and even fewer that were memorable. Mortal Blitz and Arizona Sunshine were decent and Farpoint was excellent with the Aim controller, but that’s about everything that comes to mind on Playstation VR. That’s why I was immediately filled with excitement when DOOM VFR was announced – a first person shooter by some of the pioneers in the genre that’s based on last year’s hit release.

For the most part, that’s exactly what you’re getting and it’s great fun to play despite a few drawbacks – mainly on the controller front. Technically, DOOM VFR is one of Playstation VR’s most impressive titles to date, with a visual quality that’s right up there with the likes of launch title Robinson: The Journey. Besides the obvious change in resolution and visual clarity, what stands out most are how well the detailed environments, enemy diversity, lighting effects and animation quality have survived in the transition. 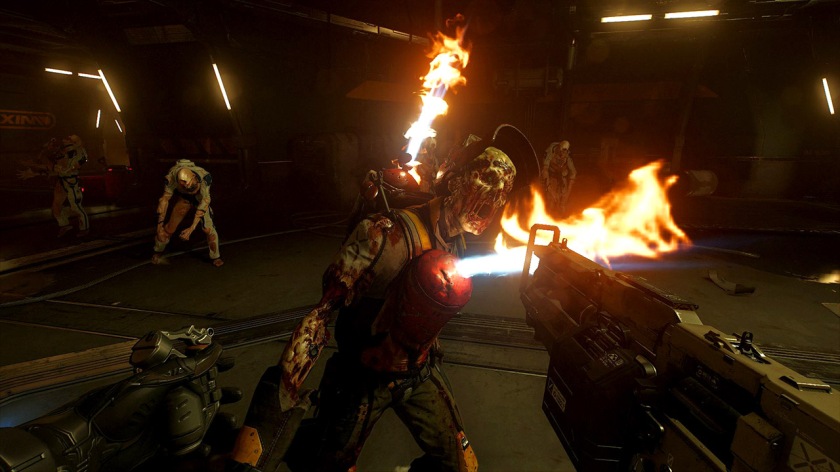 Sure, content-wise it’s quite a bit smaller than last year’s full-priced DOOM campaign (DOOM VFR is a half price title), but not every VR title can be Skyrim. For DOOM, the choice was made to not convert the original game but rather develop a new story that takes place inside the game world of last year’s campaign. This time, you’re a scientist who manages to preserve himself through the use of an AI soldier, whom you control. As always, the story takes a back seat to the action.

That action is, initially, a dream come true for shooter fans. You’re actually inside DOOM’s dimly lit corridors, see hellspawn rush towards you have the ability to take them out – and using the Aim controller is the most immersive way of doing so. Besides the Aim controller the game also supports Move and gamepad controls, and each provides a different experience.

Playing with a traditional gamepad like the DualShock is essentially like playing last year’s game, but with your head controlling the camera (and thus firing) direction and essentially serving as a right thumbstick. The Move controllers feel like they’re what they had in mind when developing the game, but they come with obvious drawbacks. Being able to dual wield weapons is awesome in a stationary firefight, but the Move doesn’t have any controls that allow you to walk around easily. There’s the ability to dash, but you’ll mostly use the teleport ability to jump from place to place in the game. It works well, but doesn’t always feel like DOOM – in which you’re expecting to frantically run around and shoot everything that moves. 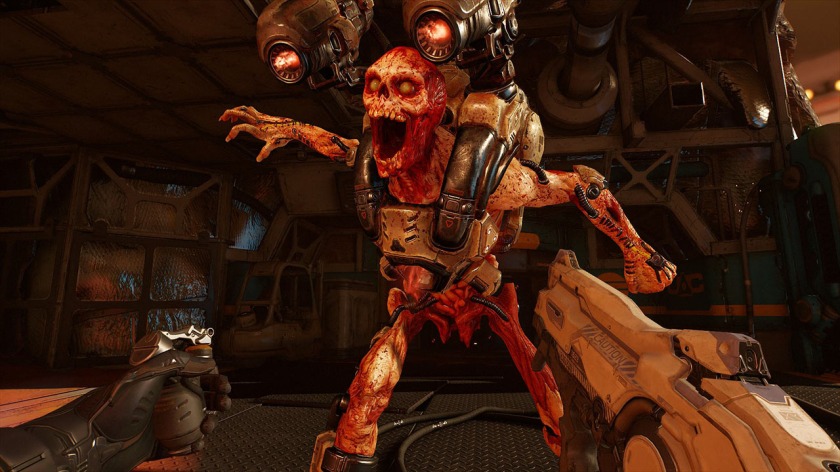 Of course, the Aim controller was designed with first person shooters in mind and it’s easily my preferred method to play DOOM VFR. Unfortunately, dual wielding is not an option with the Aim controller since you need both hands on the same controller/weapon. This wouldn’t have been an issue, but the game insists on showing grenades and/or weapons in your other hand even though you can’t directly control them. It’s a constant reminder of how the game wasn’t really changed to suit the Aim controller better, but rather had Aim support squeezed in at the last moment. I would have gladly played without dual wielding and a bit more weapon switching just to retain a better feeling of immersion, but that’s not possible at this time.

Nevertheless, I had a great time playing DOOM VFR as I did my best to overlook the shortcomings of the Aim implementation – if you have an Aim, this is a great game to get with a campaign worth playing through more than once. With a DualShock it feels too similar to last year’s original and with a pair of Move controllers it’s not enough like DOOM and the game’s reputation slightly works against it. Forget about DOOM for a second and the game (with Move controls) is a little like Mortal Blitz – the shooting action is still great, but movement is restricted.

The Move and DualShock controls are probably as good as they’re going to get, but I still hold out hope for a future patch that improved the Aim implementation for the game. DOOM VFR, with Aim controls, has the potential to be the must-have first person shooter on Playstation VR – and it’s a shame it comes so close to greatness and feels satisfied just being good old DOOM-infused fun.