NeuroVoider has received its long-awaited Playstation Vita version. Is it another conversion of an indie title Vita owners should be happy about?

The PS4 and Xbox One versions of NeuroVoider came out about a year ago, and the Steam version even dates back to 2016. With a Nintendo Switch version released last summer, it was starting to feel like the Vita was going to be left out this time – until the rumored Vita release was confirmed just one or two weeks before the game. It almost made it feel like a short wait….

Like many Vita releases these days, NeuroVoider is an indie production with a retro vibe to it. Robots have pretty much wiped out humankind and all that’s left is a small collection of human brains that they keep around. Your assume control of one of these brains, hop around until you enter an armed vehicle, and then start your campaign of vengeance and destruction. Yeah, it’s a pretty nonsensical plot, but luckily NeuroVoider isn’t heavily story-driven and much more focused on gameplay. 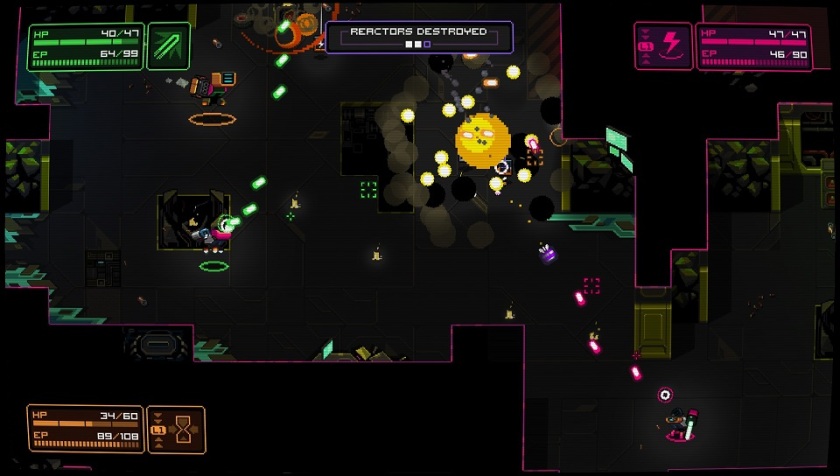 The game is essentially a twin stick shooter, but one with a few (loot-fueled) RPG and rogue-like elements included. You have a choice of three robot types, each with their own unique skills to help you through the game’s twenty or so levels. One focuses on attack, another on shields, with the third one being especially good at evasion through a dashing move. You also have the ability to add another special move prior to jumping into the gameplay, but these moves aren’t exclusive to any specific robot and can be selected no matter your choice of robot (and playing style). I personally enjoyed enabling auto-heal for my offensive character, so I could get away with my reckless playing style for a while – but ended up switching to something else entirely in the later stages of the game.

There’s far more customization than that in NeuroVoider’s weapon/loot system though, as many different weapons can be dropped by soldiers of the evil robot army you’re fighting. These enemies often look similar at first sight, but due to a combination of weapons and their look there are actually thousands of different enemy types in the game. You also get to ‘pick your battles/rewards’ due to a level select system that gives you the option between challenges that differ in how big the level is, how strong its enemies are and how much loot will be in there. While the latter seems like an easy choice, a ton of loot doesn’t necessarily mean good loot – so maybe you want to feel more of those stronger enemy types to have a bigger chance at that weapon type you want.

Controls are easy and intuitive, using your basic two thumb stick method for moving and aiming. Through loot you gradually get stronger, but the basic concept stays the same throughout – with the exception of a few boss fights that feel like a blend between the classic shoot ’em up and bullet hell gameplay. Here, learning patterns and targeting weaknesses is what it’s all about. This is a game type that doesn’t always work on a small screen like the Vita’s, but NeuroVoider’s characters and enemies are small enough to make the scale work both in basic gameplay and during boss battles.

NeuroVoider’s gameplay is extremely solid and well-designed, with special interest going out to the excellent soundtrack. There is one element that’s a big draw in the existing PC/console versions that’s missing though, and that’s the local co-op multiplayer. For obvious reasons, of course, but it does hurt a game that’s simply a ton of fun to play with at least one more friend. As a single player adventure, NeuroVoider is a nice little retro twin-stick shooter that is well designed and fits comfortably on the Vita, but it’s not as unique as we would have liked. Still, it’s good, and if you don’t have access to the other versions of the game or want to play while on the go, then this Vita version will work just fine.