Rainbow Skies, now available on PS4, PS3 and Vita as a cross-buy/cross-save title, is the sequel to 2012’s Rainbow Moon. Is it worth picking up? We played it on the Playstation Vita.

Coming our way thanks to Eastasiasoft and SideQuest Studios, Rainbow Skies has been a long time in the making. After five years in development, it quickly becomes clear that plenty of time was spent on adding content to the game and fleshing out that which was already present in Rainbow Moon.

For a lot of gamers, the game’s prequel is a title they didn’t know until it appeared as one of the free Playstation Plus titles about three years ago. Having played that game helps in your understanding of the proceedings in Rainbow Skies, but it’s not required. The game starts off by focusing on a young monster tamer who fails his big exam, and then gets caught up in between a major conflict. Later on, the perspective of the game switches between three different protagonists who each go through their own unique (but interconnected) storyline.

A turn-based fantasy RPG, Rainbow Skies’ premise of switching perspectives between different protagonists works very well when you consider the immense length of the campaign and the size of the game world. It keeps things interesting, even when the writing isn’t always great on a technical level. Both the plot and dialogue kept me intrigued though, and made it easy to forgive word choices and phrasings that were less than ideal at times.

I could see PS4 owners be a tad underwhelmed with Rainbow Skies’ visuals, as they’re both decidedly “last gen” and a bit inconsistent at times – like assets were taken from a different game and just pasted into this one, without going for a recognizable look and feel. That last issue remains on the Vita, but I thought that for an isometric, grid-based game Rainbow Skies looked nice and polished as a handheld RPG. There can be a tendency to have too much going on at once though, which is when the Vita’s smaller screen doesn’t help.

A large portion of the game is spent in turn-based combat, during which positioning is crucial to your chances of success. As your party grows (to a maximum of six) you’ll quickly learn that you need to position your team members to play into the strengths of the individual party members (like melee or ranged). Combat’s not terribly deep, but you do get to develop the attacks that you use more often so that might play into things when you consider the long run. If you don’t, you’ll face sections where you need to do a bit of grinding in order to overcome stronger monsters. 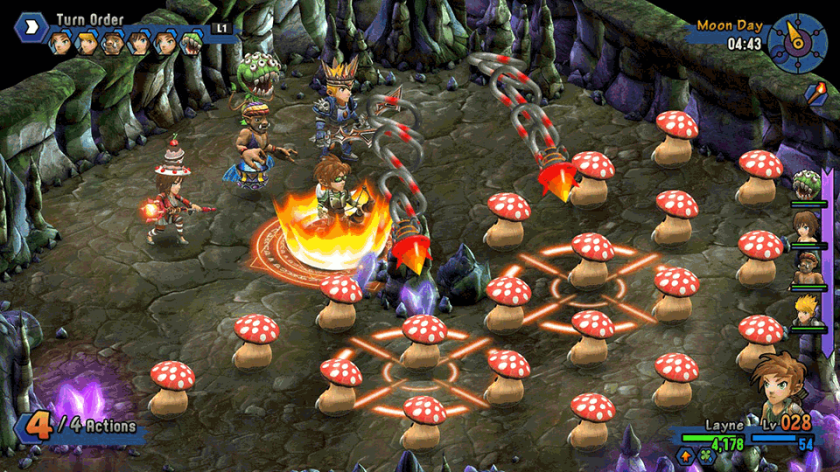 Aside from these core mechanics, there is an insane amount of stuff to do in-game as well – both integrated with the plot and outside of it. You can find loot/items to help you develop your characters and their abilities as fairly standard RPG elements, but you also have the ability to go fishing (which reminds me that I still need to play that Final Fantasy VR expansion) and grow/develop monsters you can take into combat with you.

There’s nothing shockingly new or innovative about Rainbow Skies, but there’s an absolute ton of content here and it’s a game that’s easy to pick up and play for hours at a time. In the Vita’s current life stage, I was more than happy to have something like Rainbow Skies to play – I could imagine PS4 owners being less than impressed though, so consider your system of choice before buying.