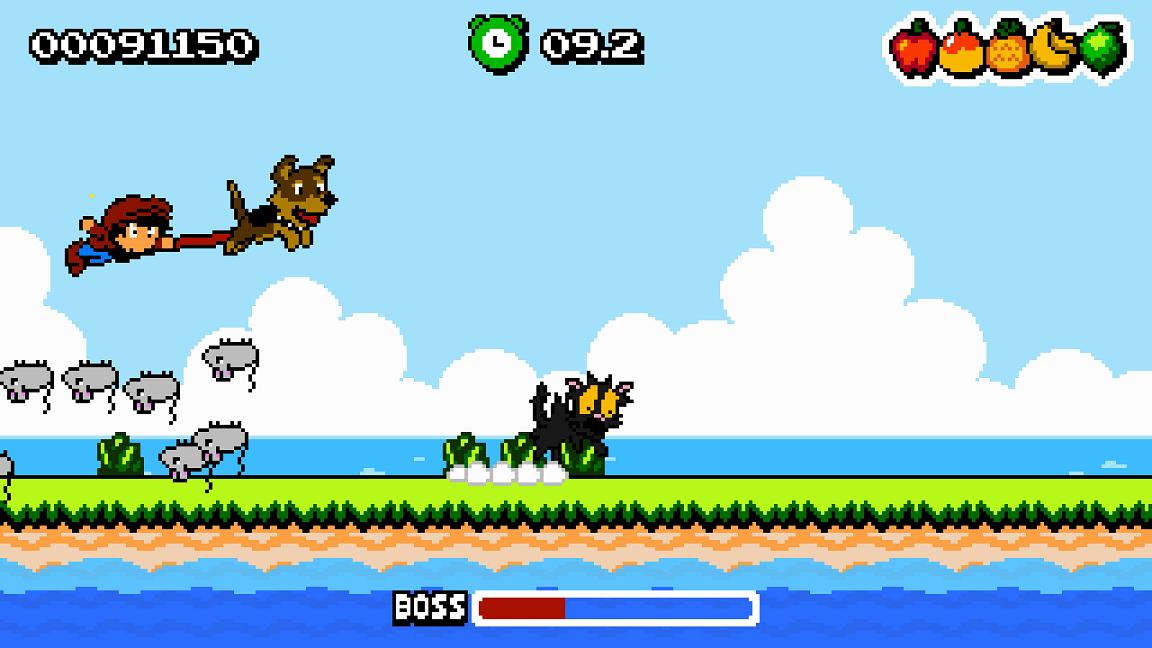 It hasn’t been long since we reviewed Kid Tripp for the Vita, and Miles & Kilo is a spiritual successor to that game – as well an even better game in several ways. It’s been out on mobile devices, PC and Switch for a while now, but we just got the chance to play the Vita version.

Developed by Michael Burns, Miles & Kilo stars a young boy (Miles) and his dog Kilo, who get lost in a storm and end up trapped on a haunted island. A specter called Ripple assures them they’re going to have a great time, but it doesn’t take long before Miles becomes skeptical about this. Their plane gets taken apart by Ripple’s buddies, and thus starts your adventure to try and escape the island.

Your journey will take you through 36 levels (five of them being boss fights), most of which will take under a minute to complete – but we’ll address why this isn’t a short game later. As with Kid Tripp, this new game from Four Horses also has a distinct retro feel to it, with visuals that give off a clear “Super Mario World” vibe. But where Kid Tripp had auto-run, Miles & Kilo plays much more like a traditional platformer (though auto-run is still an option).

Playing as Miles, you can traverse the levels at your own pace, tackling its challenges and defeating or avoiding its enemies. During the levels where you play as Kilo (dragging Miles along behind you), the game turns into an auto-runner and presents a different kind of challenge, in which you need to memorize what’s coming if you want to do well.

The trick to completing a level successfully isn’t just to get to the end (though that works too), it’s to also grab all of the coins in the level, have enough fruits left over at the end (this is Miles’ ammo) and to finish within the target time. As a result, even when playing with Miles, you’ll eventually end up running left to right pretty quick – but having access to traditional platforming controls is certainly an improvement in terms of learning levels and making the game more accessible.

That doesn’t mean that Miles & Kilo is a walk in the park though – it’s a challenging platformer with a flexible difficulty level. If you’re content to complete the levels on your own terms, then you can do that (though Kilo levels and boss fights are different). If you want to push towards the highest possible ratings for each level (unlocking all the trophies as well), then you’re going to be spending a lot more time with the game.

Once you complete the game for the first time, you’ll unlock a special time attack mode where you can push for better scores on the leaderboard (which will also help you unlock the game’s trophies). Perfecting a level isn’t easy though, and can easily take at least five to ten attempts – only to find out someone else still did it in less time than you did.

Miles & Kilo’s presentation is excellent – the retro NES/SNES-style visuals are complemented by a good selection of chiptunes as well as sound effects that feel like they were plucked straight from 1991. After every couple of levels you’re also treated to a retro-inspired (pixelated) cutscene to help keep with the narrative of the game.

Despite the cute visuals (even the enemies look cute) I wouldn’t recommend the game for younger players mainly because of how challenging some of the jump/attack-sequences can be, even in the early levels. Expect to fail often, but at least Miles & Kilo has very short load times and you can instantly restart a level.

I already enjoyed Kid Tripp, and although Miles & Kilo doesn’t rise to the heights of Vita platformers like Rayman Legends (or Origins) it’s a mighty fine retro/indie title that’s a definite improvement over Four Horses’ last game. And for the price, this is a must-have for platformer fans.