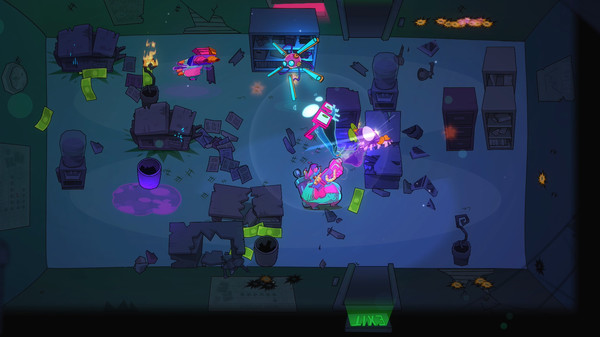 Headup’s Dead End Job is out now for Xbox One, PS4, Nintendo Switch, PC and mobile devices, so pretty much anyone has a chance to pick it up. Here’s our review of the PS4 version to help you decide whether or not you should.

In Dead End Job, you play as Hector, an employee for Ghoul-B-Gone – the game’s version of the Ghostbusters. It’s not quite as glamorous as you might think though, because your tasks consist of traveling to various sites to rid them of its paranormal guests. In a double entendre kind of way, part of your job is also to try and strive for that promotion so you’re not stuck forever doing your boss’ dirty work. And while you’re at it, you’re also trying to save your former and recently passed mentor Beryl Ware from an unwanted post-mortem fate by building a machine that will bring her back to life. Sounds a little crazy? That’s intentional.

The money you get for your jobs adds up to a grand total, telling you how far you are from your grand goals – and successfully completing jobs means you’ll get some bonus money that helps you get there faster. There’s a risk versus reward dynamic here as well, because bigger jobs can bring bigger bonuses, but they they’re also more challenging and failing them can result in a demotion.

The opposite is also true – being promoted gets you access to boosts/perks that make you more effective at your job or let you build up your inventory and cash reserves quicker. This makes for an addictive game loop where you constantly get promoted and demoted, wanting to either keep raking in the cash or get yourself back up after a mission gone wrong.

During each job, you have to save a couple of innocents at the location you’re cleaning, with extra money awarded for how clean you leave the place (read: how many ghosts you get rid of). You’ll have a safer shot at the exit if you get rid of as many ghosts as possible, but all those confrontations will also mean that there are more chances for them to nibble away at your health bar. In some cases, you’ll just want to rush by them in order to at least save the people who are hiding or trapped in a level, so that you at least complete the main objective.

Dead End Job is a colorful 2D twin stick shooter with visuals that were clearly inspired by cartoons – its creators credit Ren & Stimpy as a source of inspiration. Think Ren & Stimpy meets Ghostbusters and you’ve got a pretty good idea of what you’re getting. This doesn’t just stop at the visual style, but also translated to a lot of silly humor, which makes this a lighthearted and fun game rather than a suspenseful ghost-filled romp. Levels are randomly generated each time, but you have one room on screen at the same time so you never lose that “sweeping the building room by room” feel – though building layouts change and you can dynamically tackle the order in which you clear rooms. 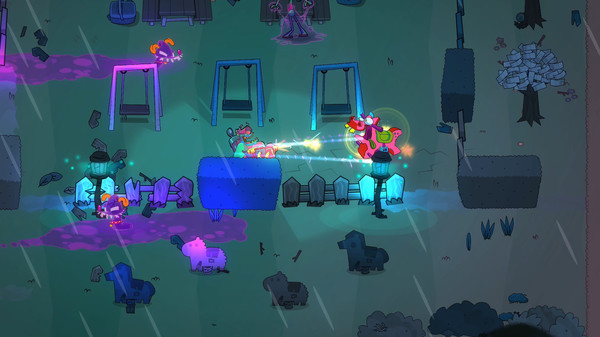 Starting out on a level, you’re armed with a basic gun and a vacuum – the latter being used to trap ghosts. There are often bonus objectives available that reward trapping a certain number of them, so it’s a smart idea to figure out what smart tactics are for doing so. From that perspective, it helps that Dead End Job features local co-op play, where another player can jump in and help out and get you to that next reward marker.

And this, essentially, is what constitutes your time with Dead End Job. There are always rewards to chase – often multiple ones at the same time, and there’s an addictive game loop. Local multiplayer works great, though things get a bit repetitive if you decide to go for longer gameplay sessions. The game’s best suited for short busts where you take on a couple of jobs to get further in the story, and then take a break after an hour or so. From that perspective I’d expect this is an awesome time for the Switch as well, which suits the game well in terms of taking the experience on the go and picking things up again when you get home. I ain’t afraid of no ghosts.