The Prinny 1 & 2: Exploded and Reloaded collection launches next week on the Nintendo Switch, and brings together two classic PSP titles. How do they hold up?

Oddly enough, the two Prinny titles on Sony’s PSP were my first interactions with the Disgaea franchise – I played them before I had even heard of Disgaea, and as such they’ve always held a special place in my heart and don’t just feel like “spin-offs”. Both Prinny: Can I Really Be the Hero? and its sequel Prinny 2: Dawn of Operation Panties, Dood! are included in this compilation, and even though they’re over 10 years old at this point they have aged quite well.

From that perspective, it helps that the Prinny games are 2D action platformers, and 2D generally ages better than 3D does. Having said that, this is pretty much a straight up port of the PSP originals and little was done to make use of Switch-specific capabilities and the added processing power – even the resolution did not change and things look a little stretched out on the Switch’s screen, even more so on a television.

What definitely survives intact, however, is the excellent sense of humor that comes with the Prinny titles, which are generally a lot goofier than the Disgaea games. There’s a novel gameplay twist here as well, which gives you 10 hours to complete your quest and about 1000 Prinnies to help you do so. From there, it’s a fairly standard 2D platformer with all of the usual (double) jumps and the ability to dash and attack enemies. As you progress you also automatically charge up a meter that grants you special items, although this mechanic is replaced with a supercharged attack in the second game. Differences between the two games are otherwise easy to miss though, as both are quite similar in look, feel and structure.

The platforming in Prinny 1 and 2 always felt quite ‘retro’ in terms of its mechanics, and the Switch ports don’t change that. You can’t change direction mid-jump (with the exception of a double jump) and you can’t control the height of your jump either, which are two conveniences in modern platformers that take a while to ‘un-learn’. This is what a lot of classic arcade platformers were like though, so the added challenge was always a welcome one for me personally. 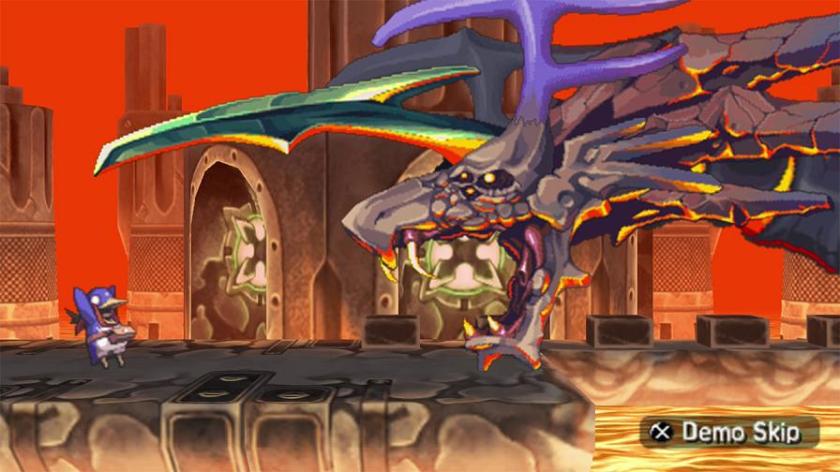 While ‘challenging platformers’ these days often follow the Super Meat Boy formula that is ultra-precise controls that help you tackle elaborate obstacles, the battle in Prinny is less about the obstacles and more about practicing and getting comfortable with the layouts and controls. It takes a bit of perseverance to not succumb to frustration, but Prinny’s charm and humor make it worth the journey.

It’s a shame that these Prinny ports are exactly that – ports of the existing games. Without so much as a bump in resolution, they offer very little to fans who still have their PSPs waiting to be charged. It’s nice that a new audience gets to play these portable classics, but ideally we just have our fingers crossed for a new game in the series. Pretty please, dood?