Some of the most exciting releases aren’t actually new games, but rather new content for games we already know and love. Today we’re checking out all-new expansions for Final Fantasy VII Remake, The Elder Scrolls Online, Wastleland 3 and Phoenix Point.

The already impressive remake of Final Fantasy VII, which we reviewed on the PlayStation 4, is heading to PlayStation 5 this week with an upgraded version called Final Fantasy VII Remake Intergrade. It’s a free upgrade for people who already own the game on PS4, but there is also a brand new chapter available that’s not included in that upgrade. Dubbed “EPISODE INTERmission” (yes, we also don’t know what’s up with all the caps), this new narrative chapter can be bought as a DLC add-on for the game or as part of a new PS5-only package.

Whichever path you take, the expansion benefits from all of the technical upgrades that players of the base game also get on the PlayStation 5. This includes a choice between graphics mode that either renders at a 4K resolution or runs at a stable 60 frames per second. Textures, lighting effects and backdrops have also been enhanced, and there’s a new photo mode that helps you show all that off as well. Add DualSense support and the usual faster load times, and you’ve got an experience well worth diving back into. 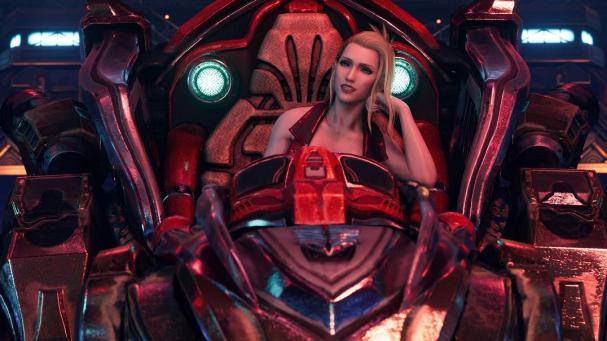 The main draw, for those who already played the PS4 original, is the new chapter that stars Yuffie Kisaragi. Already a familiar character to those who’ve explored every inch of Final Fantasy VII, Yuffie is a ninja who is highly skilled as well as an attractive and charming young woman – which makes her a bit of a femme fatale and a multi-faceted character that’s interesting to follow around.

You’re sent on a mission to reclaim materia, but pretty soon you find yourself in a web of intrigue. We don’t want to spoil too much of the story here, but Yuffie’s adventure features plenty of action and she’s a joy to play with thanks to a good mix of ranged and melee combat. A master with ninjutsu and her throwing stars, you’ll later also unlock more mystical attributes of the ninja when you gain access to elemental powers. And with a strong supporting cast and extremely high production values, this is an expansion that fans won’t want to miss when they make the switch to PlayStation 5.

The Elder Scrolls Online was released way back in 2014, but since 2017’s release of Morrowind we’ve been getting a big new content release every year around the same time. Like clockwork, this June brings the release of Blackwood, a new chapter for the game which is out now on all platforms.

And as with previous chapters, Blackwood brings Elder Scrolls fans back to a familiar territory. Last year’s Greymoor took us back to Skyrim, and Blackwood lets us journey back to the city of Leyawiin, which fans will remember from Elder Scrolls IV: Oblivion. You’ll also need to venture out into the surrounding swaps as the story unfolds, but for now (at the start of the new season) the locations are the main attraction, and partly for nostalgic reasons.

The story itself, which we won’t go into very much so as to not spoil it, acts as a sort of prelude to the events in Oblivion. While that’s great in terms of appealing to fans of that game, like myself, it also means that surprises are few and far between, since you pretty much know ‘what happens at the end’ here. That’s too black and white, but you’ll see what I mean when you play Blackwood. The story, both in terms of richness and pacing, feels like it needs to pick up some steam over the course of the coming season.

Wasteland 3 – The Battle for Steeltown DLC

Released during Gamescom last year, Wasteland 3 perhaps didn’t get the attention from gamers that it deserved – it’s a fantastic game and one of last year’s favorites for us. An amazing world to explore, excellent writing, choices that matter and great combat makes for a must-play experience. It’s just received its first story-driven DLC add-on with The Battle of Steeltown, which continues that trend.

The Battle of Steeltown isn’t a standalone expansion, but is mixed in with the base game – you can start the new story content once you reach level 9. At that point, you’ll be asked to travel to Steeltown, which supplies weapons to the Patriarch but has run into a bit of trouble. You’re supposed to investigate, and before long you’re in the middle of a complex situation where people have gone on strike and/or missing, a rogue AI isn’t helping matters and tensions are high.

What’s extremely impressive about that scenario is that, even though The Battle of Steeltown feels like a self-contained chapter, the choices you’ve made in the base game also affect what happens in Steeltown. It can be a double-edged sword because it’ll make you regret some of your earlier decisions, but for me it’s also made me want to play all of Wasteland 3 from the beginning again – though I’ll probably want and see if other expansions are coming first.

The storytelling and world building quality of Wasteland 3 carries over to The Battle for Steeltown, but the expansion does mix up the combat with new and challenging mechanics. Because you’re often fighting factory workers who are on strike, people now expect you to subdue rather than kill them, so they’re not lost as workers. This introduced non-lethal weapons, which adds a whole new tactical layer to the combat, as do new units – including a mech. The additions make this a challenging DLC best suited to those who have already completed the base game and have mastered its mechanics.

Compared to the length of the main quest, The Battle of Steeltown is unfortunately a lot shorter than we had hoped, clocking in at way less than four hours of gameplay time. It’s a great new chapter for a brilliant game, but after a nine month wait we were expecting a little more. Still, this is an essential purchase for Wasteland 3 players, although if you can muster the patience it could be smart to wait for additional DLC to drop.

We covered Phoenix Point when it initially launched on the Epic store, and recently checked out the Steam launch of the Year One edition, which is a much improved and expanded version of the original game. Now, Snapshot Games has launched an expansion pass for the game as well as the first DLC drop for it: Festering Skies.

I’m bringing up the expansion pass for a reason, because the price difference is quite significant here. The pass includes three DLC packs – two of which are unreleased right now – and if the other two are priced like Festering Skies then you’re getting everything at half price. That’s worth considering, for more reasons than just the money you’d be saving. More on that in a minute.

Festering Skies features a brand new story expansion, and much like the recent Iron Harvest expansion there’s a big role here for aerial combat. Your main adversary this time are the Pandorans, who’ve taken to the skies and pose a formidable threat, forcing you to quickly research and implement your own sky armada to counter their attacks.

It’s a great idea and after Iron Harvest: Operation Eagle I was looking forward to seeing the concept applied to a turn-based formula, but at release the difficulty level makes the odds firmly stacked against you to the point of it feeling unfair and frustrating. The best way out of a battle seems to be to just pour endless resources into it, when what I like best about Phoenix Point is how it allows for a number of tactical options in each battle. Perhaps I’m just overlooking something, but for now I would suggest waiting for a bit until a few patches arrive. Once we get the second DLC pack in sight, I have a feeling that the expansion pass will be worth it.