With The Dungeon of Naheulbeuk, Unspottable and Metro Exodus, we’re looking at three titles that were recently ported over to new systems. With an RPG parody, a couch co-op mini game and a AAA first person shooter for next gen systems, there’s something for everyone this time.

The Dungeon of Naheulbeuk review (PS4)

Previously published on PC, The Dungeon Of Naheulbeuk: The Amulet Of Chaos from developer Artefacts Studio has had quite a development journey already. Now, with Dear Villagers on publishing duty, it’s also heading to consoles, so after an earlier time with the PC original we went into the dungeon for a closer look.

We first saw The Dungeon Of Naheulbeuk way back in 2015, when Microïds teased it during the trade show season. Then, three years later it resurfaced under the Playdius label, a label that in 2021 is no longer active. It’s been reborn as Dear Villagers, and they’re finally bringing this long-awaited adaptation to consoles after a 2020 release for PCs on Steam.

The history of the game goes back much further than 2015, with an audio series that launched twenty years ago and subsequent releases of (graphic) novels – all based on the premise that this is a parody on familiar RPG tropes. As such, you don’t need to be familiar with previous Naheulbeuk lore, but for an understanding of its references it helps if you’re familiar with the genre it’s trying to poke fun at.

Of course, in videogaming, we’ve seen a similar approach being used with the South Park: The Stick of Truth game, but it’s fun to see the formula applied once more – this time with a turn-based combat RPG that looks a bit like XCOM at its heart. The general aesthetic and theme are very much dungeons & dragons-inspired though, with all the usual dwarves, elves and barbarians you’d expect.

The turn-based RPG mechanics that are the backbone of the actual gameplay experience are functional, but nothing more than that – you’ll have seen better in games like Pathfinder, and you’ve definitely seen it done better in full-on turn-based strategy titles like XCOM or Phoenix Point. Naheulbeuk’s strategy too often feels like it relies on chance and not solid strategy – though perhaps at some point it was decided that this too was a deliberate jab at some table top RPGs and its dice rolls.

Most other jabs are far more on the surface of things, with tons of comedic writing being delivered both on screen and through the voice-over work. This is obviously a matter of taste and tone, and this is where familiarity with the franchise will help you decide if this is the right game for you, but we actually liked what was on display here. Some of the humor is on the crude side of things and we can see players turning away from it because of that, but if you enjoy a good parody in videogame form then The Dungeon Of Naheulbeuk: The Amulet Of Chaos is one of the better options since the release of The Stick of Truth back in 2014.

Developed by GrosChevaux, Unspottable first game out on the Nintendo Switch, Steam and Xbox One, but is now available for the PlayStation 4 as well. It has ‘just a mini game’ written all over it, but it’s a blast to play thanks to gameplay that’s easy to pick up and a focus on local multiplayer. The later makes it a game with a limited audience, but those who enjoy mini games should take a look at Unspottable.

The core concept is wonderfully easy to explain. On any given level there’s a group of identical looking robots, and you and the other players all control one of them. You’re not told which one because that would immediately give your identity away to the others, but figuring out which robot is following your movements will help you single out your little avatar.

From there, it’s your job to figure out who the other human characters are – who is behaving strangely? Slapping them scores points, but if you’re wrong then you’ve just exposed yourself by hitting a legit robot character and others will be onto you. It’s a digital game of hide and seek that builds on hand-eye coordination and can be played by young and old.

There are a few mechanics here that mix things up, like the ability to win by collecting items and then leaving the room, but of course going for these items can also reveal your intentions and thus identity – when the game says an item has been picked up, you know it’s one of the robots near the spot where that item can be found. Some levels also let you hit a ‘distract’ button with temporarily zooms the screen in and out, and you can try to blend in again while this happens.

Despite curveballs like that, Unspottable is easy to pick up and play, and even has a quick tutorial that you can use to welcome newcomers. As with most mini games, repetition sets in after a handful of games, and with a lack of other mini games to choose from it’s a good idea to cycle players in and out of the game or to just come back to the game again later. It’s a solid part of any couch coop session with family and/or friends, no matter if you enjoy Mario Party or the Jackbox games. And although online multiplayer is missing, this is one of those examples that is just way more fun when you’re both looking at the same screen, figuring out who’s who.

Metro Exodus launched at the start of 2019 and after two major DLC chapters we got a Complete Edition earlier this year. Besides just bundling all of the existing content into one convenient package, it also came with a brand new update that gave the game support for some of the latest innovations in graphics, including raytracing. Now, Deep Silver and 4A Games have launched the same package for next gen consoles, and we couldn’t wait to see how it fared.

Before we dive into the next gen stuff, it’s worth pointing out that all of the content you already owned on the last gen (PS4 or Xbox One) converts to the new next gen versions for free – so if you owned the base game and the expansions you’re now the owner of the next gen complete edition as well. If you didn’t, then the new bundle is available at roughly half price – and it was even less during the launch window thanks to an additional discount.

If you played the first Metro games but haven’t touched Exodus yet, then the first story beats in the game will feel familiar – taking place inside the Moscow underground where people have taken refuge after nuclear war made life on the surface pretty much impossible for humans due to radiation. As with the previous games, you assume the role of Artyom, but this time you learn that there might actually be safe havens out there that are free of radiation, and events quickly unfold that force you and a few close allies out of the Metro for a daring escape, looking for a new life.

It’s a change that makes for far more open game environments as you travel from hub area to hub area, and Exodus feels like less of a claustrophobic “Metro” experience because of it, but we still feel like it’s a great shooter with a strong atmosphere and immersive story, and the DLC stories are excellent as well, showcasing different sides of this now global narrative. 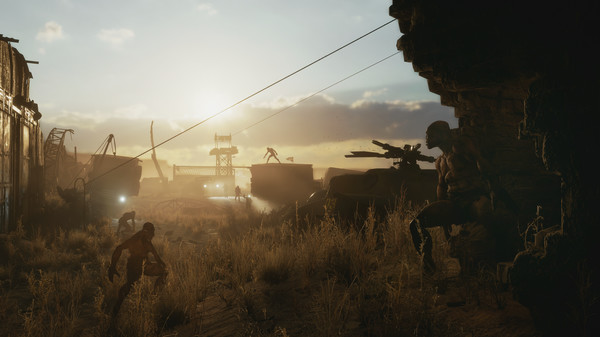 The real appeal of this release, however, are the next gen tweaks that have been made. Some are comfort updates like faster load times – which because of the large open areas needing to be loaded into memory is a major difference. How these areas are brought to life is the real draw though, because the new version supports stable 60 FPS frame rates and enhanced detail levels with new 4K-optimized textures.

What was most eye-catching to us, however, were the new lighting effects, which make use of ray tracing. Metro Exodus uses large and diverse areas, from mountainsides to waterfronts and from military facilities to remote settlements, and every single one of these pops more thanks to the new lighting effects – from the electric hum of old indoor lights to the sun rising over the waterfront, it’s a lovely showcase for what new tech can do for an already excellent shooter. Combine DualSense support to that, and it’s a next gen release well worth checking out – for those who can do it for free but also for newcomers who can now pick it up at a budget price.