Here are three more games that we missed when they originally launched, but which have now made it to the PlayStation platform. We look at Inked: A Tale of Love, Earth Marines and Poker Pretty Girls Battle: Texas Hold’em.

Developed by Somnium Games and published by Pixmain, Inked: A Tale of Love originally launched back in 2018 but was recently remade and ported to consoles as well. With its unique pen-drawn visuals and sparse but effective use of color, it reminds us of recent indie gems like Chicory and TOEM, but Inked is definitely its own unique experience.

In Inked, your protagonist is literally called The Nameless Hero, a former samurai who’s looking forward to retiring and living the quiet life. A deadly plague soon hits their home valley though, which sets you off on a journey to find out what’s happening. When you lose your wife at the hands of the world’s Creator – the one who draws the world around you – you’re quickly drawn into your old heroic ways, and a fully narrated and grand (but short) adventure starts. 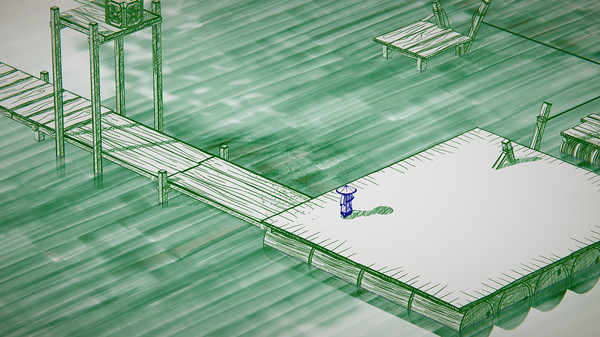 Presented from an isometric perspective, Inked: A Tale of Love mostly features puzzle gameplay, with gradually introduced mechanics that start off with simple block pushing mechanics but become more complex over time, introducing physics elements and machines. The original 2018 release features additional non-puzzle mechanics as well (including some platforming), but in 2021 you’re looking at a game mainly targeted towards puzzle game fans.

There’s an interesting “meta” aspect to it all as well, as the Creator regularly shows his hands to interact with the world as you traverse its nine chapters – each with a unique look and feel to it. Visually, this is mainly done through color use, as the game sticks with its beautiful pen-drawn look throughout the campaign. Add a great musical score to that, and you’ve got a game that pleases the senses with a presentation that’s easy on both the eyes and ears.

It’s on the short side, but those who enjoy puzzle games with an eye for unique audiovisual storytelling should find plenty to enjoy here.

Earth Marines was developed by HugePixel and Diedemor studio for a July release on Steam, but ChiliDog Interactive hasn’t wasted any time bringing the game to consoles as well. A twin-stick shooter that takes the zombie apocalypse formula into space, we checked out the game’s PlayStation 4 version. 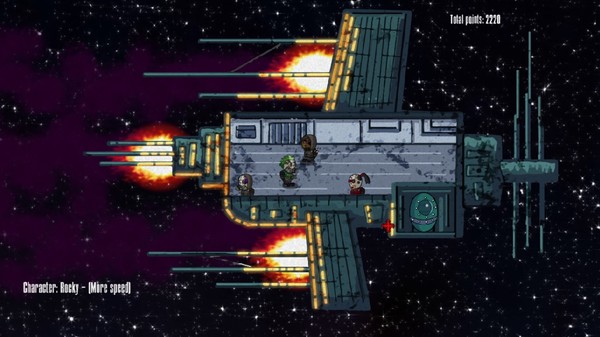 You and your group of zombie hunters are circling the earth in a space ship, but makes regular drops to the planet in order to eradicate pockets of zombies by either killing them directly or by clearing hives and/or remnants of the virus. It’s an interesting and original premise for what is otherwise a fairly generic game in many ways. Character models and especially world designs are simple and repeat themselves often, but for a game at this price point that’s easy to understand and forgive.

With a wide range of guns and other weapons to choose from, Earth Marines has some variety to it, but the balance between guns feels off. Part of that is that zombies actually have weapons too, so you’ll need something that does a lot of damage quickly. Because ammo “works” for whatever you’re holding, there’s no appeal in going back to a simple pistol at any given point, so while the twin stick shooting mechanically works well there’s a roster of weapons that is underused.

The fact that your enemies fire back at you makes Earth Marines a very challenging title though, so while there are plenty of twin stick shooters where you just spray bullets in all directions you need to be a little more careful in this one, as barging into a building is often a recipe for a quick death because zombies are incredibly precise with their shots for some reason. For most, these things will result in a rather frustrating game, but if you like the odds stacked against you then Earth Marines is a game to look into.

This one originally landed on Steam waaaay back in 2015, so we were a little surprised to see it on consoles even though Eastasiasoft has been releasing a number of similar titles these past few months. As with other games, which focused on Solitaire or Qix-like gameplay, this one also takes a familiar game (Texas Hold’em Poker, in this case) and brands it with an anime license featuring attractive girls.

The game follows all the familiar rules of poker, and is divided into rounds where you beat four girls in a group before moving on to the next group. A win gets you a glance at an anime still of one of the girls, and once you beat the group you’ll see all of them together. Outside of those stills, this one plays like a fairly standard poker game with decent AI opponents. 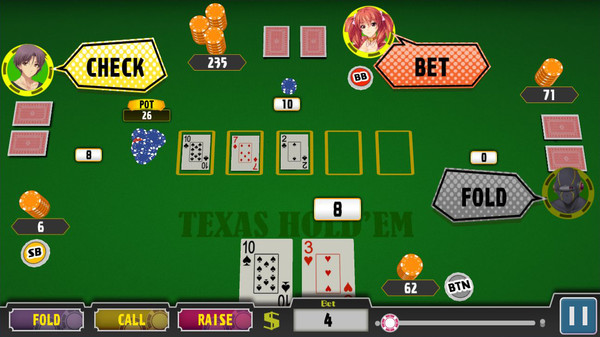 Besides the “scenario” mode described above (and they’re using the term loosely), you can also freely select an opponent in a free mode if you happen to have a favorite. It’s fairly bare bones, but for a poker game that’s not an issue – the one thing that we felt was missing was a tutorial mode of sorts to help you ease into the game.

As such, this is a simple poker game for those looking to play a quick game of poker for those who don’t need the full fledged experience that Poker Club offers. Those not into poker shouldn’t get this for the anime license as they’ll get frustrated having to learn poker on the go, but for those who enjoy both elements of this crossover it’s a solid buy at a budget price.