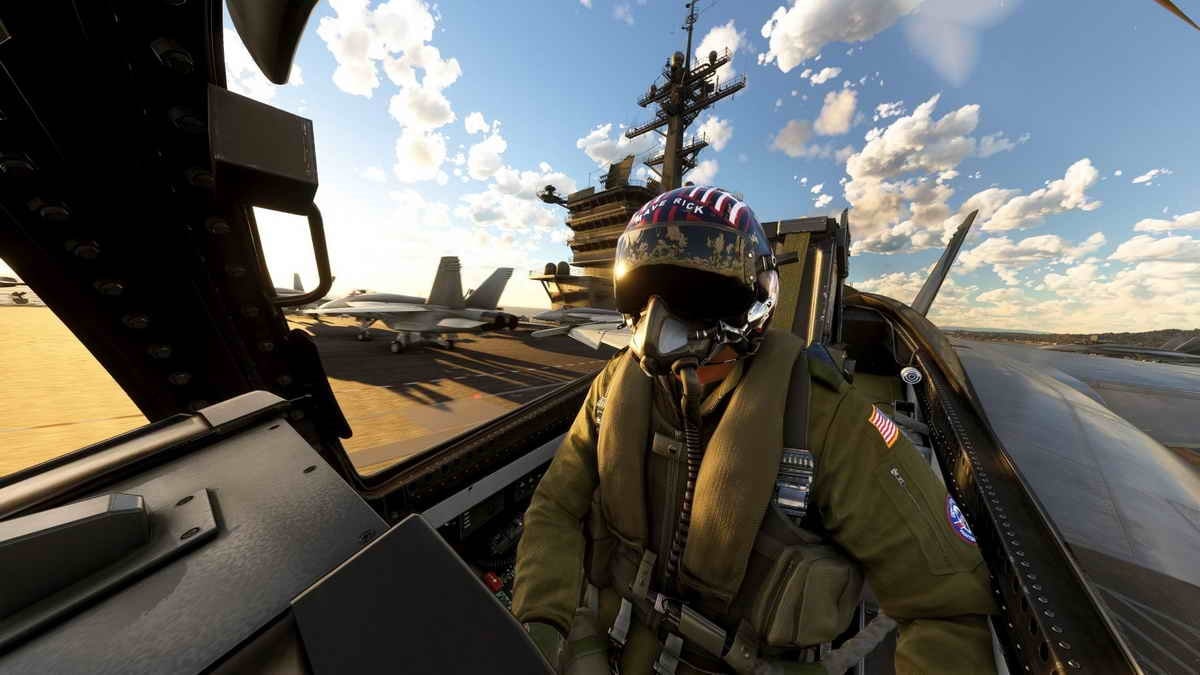 As an outlet that covers both video games and movies, few things are as exciting as crossovers between the two. The release of Top Gun: Maverick in cinemas marks such an occasion, as a free expansion for Microsoft Flight Simulator just came out that makes the base game a far more thrilling experience. To make things even more exciting, we took to the skies to channel our inner Pete Mitchell with a Thrustmaster T. Flight Full Kit X set, which is an affordable but quality option for those looking to take their flight sims to the next level. It’s also compatible with PCs as well as Xbox consoles, both of the platforms that can actually run Flight Simulator. Time for a closer look.

Whether it’s racing games or (space) flight games, the dream setup for many gamers is to have a full simulator set up in a dedicated cabin. A racing chair with a wheel or pedals, or a cockpit with a flight stick and throttle controls. Ideally, you’d pair that with a multi-monitor setup as well, letting you peek out your side windows without having to rely on camera controls. Let’s face it though, that kind of setup isn’t feasible in most households. They require a lot of space, in most cases a lot of setup, and the hardware isn’t exactly cheap either. But after watching a Star Wars or Top Gun movie, don’t you want to get in that cockpit and experience it for yourself, at least to a degree?

Without having to splurge on a cabinet, Thrustmaster’s T. Flight Full Kit X can deliver that experience. Its name doesn’t exactly roll off the tongue as a collection of appropriate words that feel strung together, but it certainly lives up to its promise with a fully featured kit that features a flight stick, a throttle stick and a pair of pedals that offer rudder control – all at a price point that’s roughly the price of a pair of DualSense, Switch or Xbox controllers if you keep an eye out for a deal.

Very often, when playing around with a “budget” solution, you can instantly tell. It can be the build of a headset, the loose feel of a gamepad’s buttons or just the overall look and feel of the kit. With the T. Flight Full Kit X, we were extremely pleasantly surprised at how sturdy the hardware is built. It’s not built like a tank like some other HOTAS kits that rely more on metal than plastic, but all three components have a good sense of weight to them – which is crucial if you’re not looking to break the immersion when flying a heavy 747.

The stick is an excellent partner for the wide range of aircraft in Flight Simulator because of its adjustable sensitivity – you can change the tension on the stick easily with a dial on the base of the unit to make it more rigid (for a large passenger plane) or a lot more responsive when you’re piloting a small aircraft. For a fighter jet, we felt that the middle ground worked best – combining both the power and agility of these crafts. 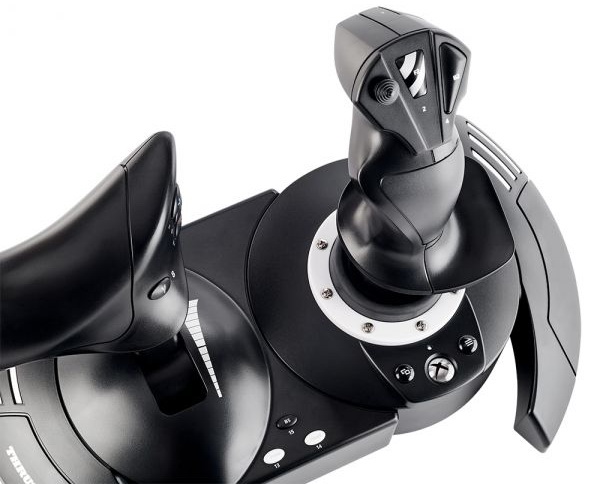 The throttle controls have a good feel to them as well, thanks to a wide grip and a good amount of resistance on the throttle stick itself. If you’re shy on desk space then you can use the flight stick and throttle controls as a single unit as well (docked together), but you can easily undock the two for a wider setup. In our case, we had the flight stick on the right side of a keyboard and the throttle controls on the left, and when playing on Xbox you could place your gamepad in the middle for when you need to navigate a menu or the console’s home screen. We imagine that the included USB cable will be on the short side for a lot of console setups though, as it’s only about a meter and half long and most gamers will be sitting further away from their TVs than that. Nothing that a USB extension cord won’t fix though, so it’s easily remedied if you need it.

The included pedals aren’t as versatile as the stick though, as you can’t adjust the tension in the rudder controls that are tied to it. So when you have your stick set up for flying a plane with 300 people on board, they’ll feel relatively loose in comparison – though you won’t notice much of an effect in-game in that scenario because those planes move like oil tankers most of the time, and the rudder just keeps things steady. It’s more noticeable in more action-oriented sequences, when you’re trying to pull off stunts of dogfighting, where as a novice on the pedals you’ll quickly oversteer.

Which naturally brings us to the brand new Top Gun: Maverick expansion, which is available right now for everyone who owns Microsoft’s latest version of Flight Simulator. We played it on a PC, which is historically the home of the franchise, but Xbox Series S/X and even Xbox One owners (streaming through Game Pass) can enjoy the content. And as you’d expect, a Top Gun expansion leans heavily into the more adrenaline-fueled side of flying – which is an absolute delight in the change of pace it delivers from the usual zen-like experience that Flight Simulator can offer.

As you’d expect there is some cosmetic content here (a special livery for the already included F/A-18E Super Hornet), but the bulk of what you get is gameplay-centered, and you can start with a couple of training missions that prepare you for a series of challenges and an exclusive high altitude mission with a new hypersonic aircraft. You’ll get the most thrills from the high speed maneuvers where you’re whizzing right past hillsides though, which is very exciting when you feel like you’re mastering them – steering to within inches of a certain crash with the flight stick and throttle controls in your sweaty palms. By comparison, the act of smoothly landing on the deck of a carrier ship feels like peanuts, although it’s a tricky move that you’ll likely fail at a few times before you get it right.

Sure, it’s not the same as learning how to pilot a jet yourself or booking a fly-along, but it’s also far more accessible. With surround sound connectors plugged in and the T. Flight Full Kit X hooked up, you can be like Tom Cruise for the evening – you can even jump on the couch from excitement when you get that move just right.