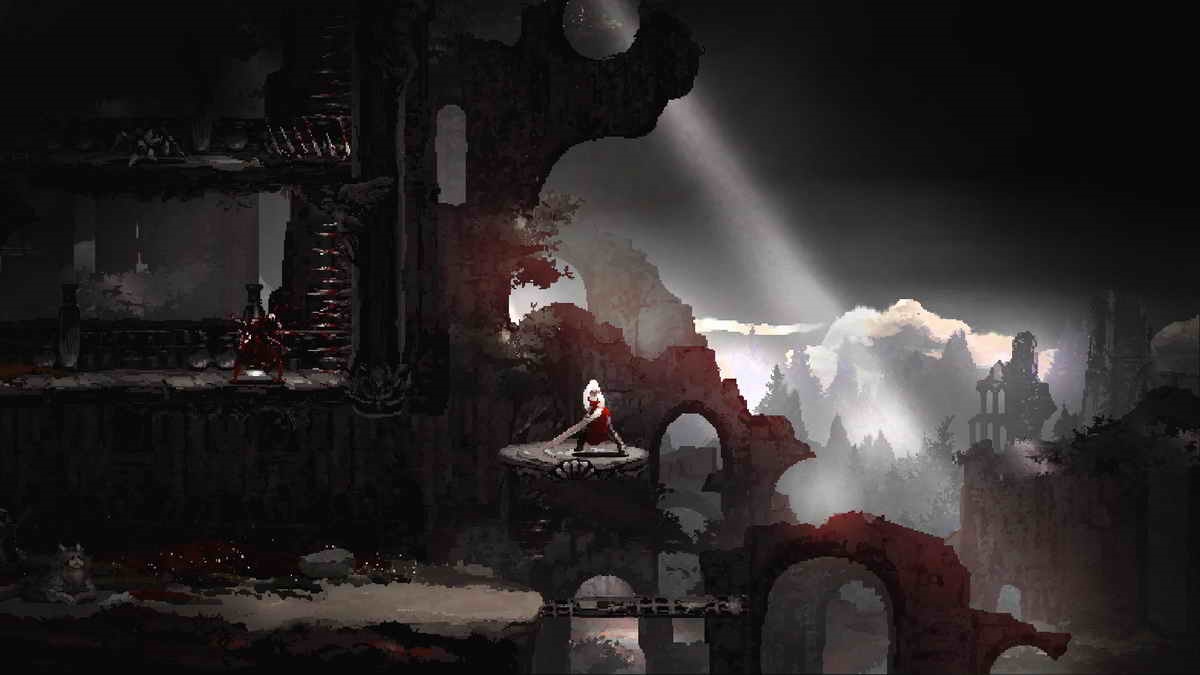 October and November are filled to the brim with big and small(er) releases, and we’re taking out some time to focus on a trio of recently released indie game productions. Here are reviews for Moonscars, C.A.R.L. and Jack Move.

How quickly things change. Just two years ago, upon hearing the name Humble Games we’d immediately think of their Humble Bundles, yet now our first thought immediately go to the company as a publisher of indie titles. We really liked their recent release of Midnight Fight Express, so we couldn’t wait to try out Moonscars.

The premise of the game is certainly dark and intriguing – you’re Grey Irma, and you were born out of clay. In a 2D world, you’re battling a darkness that seeks to stop you from reaching the Sculptor in search of answers. And a soulslike, progress doesn’t come easy, through upgrades and experience you’ll gradually get better and overcomes the hurdles in front of you.

What makes Moonscars stand out is its gorgeous audiovisual style. A bit like Sin City, it’s pretty much a black and white world in which red is used effectively as a style element. It makes for some stark contrasts in a gorgeously detailed pixel art environment, which is backed up by an atmospheric soundtrack to help create a foreboding mood.

Your large sword is your primary weapon, which can also be used for parrying and countering, but over time you’ll also add ranged weapons and magic attack to your arsenal. There’s an interesting mechanic for special weapons as well, which involves fighting a cloned version of yourself in order to choose additional weapons. Or rather, the original version of yourself that you left behind in a sort of magic ritual that involves a black mirror. From a fantasy perspective Moonscars offers a lot of interesting angles like that, though it struggles at times with its storytelling, which feels fragmented.

Upgrading is done by spending your funds on new spells and items and finding upgrades – Grey Irma’s own stats don’t level up. This actually makes sense, but makes exploration and inventory management extra important – especially when you factor in some of the other gameplay mechanics at work here (like those black mirrors). As a soulslike it throws harsh difficulty spikes at you though, which is something to be mindful of – this isn’t the metroidvania it may look like at times. Instead, it’s a gorgeous 2D adventure with a dark theme, and while it’s not as accessible or fun as Midnight Fight Express it’s another quality release from Humble.

We see a lot of ‘retro platformers’, but it’s not that often that we see one that uses PC platformers as a source of inspiration. C.A.R.L, which stands for Computer Automated Resource Locator, is one such game, and longtime gamers will recognize the visual similarities with games like Duke Nukem (pre-3D), Commander Keen and Jazz Jackrabbit – games that were released on PC in a time where consoles reigned supreme in the genre.

C.A.R.L., designed by Andrew Kenady and Morningstar Game Studio, also introduces RPG and story-driven elements into the mix, which makes for a nice retro-flavored cocktail where you control a little automaton trying to find his way inside a large industrial facility. Floors/levels are often large and can be challenging to navigate, but also house plenty of secrets and a good amount of platforming challenge. There’s a hub area that gives you access to (new) levels and upgrades, and it’s the latter which grants replay value to previous levels, which have secrets you can only get to once you’ve upgraded.

It’s a very well designed game and a lot of fun to play, even though it mostly plays things safe. You can complete the game without hunting for secrets, puzzles and bosses aren’t likely to frustrate and characters and plotlines are generally very endearing. The same is true for the soundtrack, which is a lovely throwback to when you still needed to buy and use a dedicated sound card in order to get anything out of your PC that wasn’t PC speaker noise. C.A.R.L. isn’t the most novel or daring approach to the genre, but it checks a ton of boxes that those nostalgic for PC-like platformers will enjoy.

When we saw the first announcement for Jack Move, we had no idea what to expect, looking at the title. We weren’t expecting a JRPG in a cyberpunk setting though. Developed by So Romantic and published by HypeTrain Digital, it’s out now for all major systems and provides an enjoyable 8 hour romp with some classic turn-based combat mechanics in a cyberpunk environment.

In Jack Move, you play as Noa Solares, a hacker living in Bright Town who sees her father Abner kidnapped by an evil corporation (is there ever a cyberpunk story without one?). She sets out to get him back only to stumble upon a larger plot the Abner was in the middle of. And while your embark on this adventure by yourself, you have the support of your best friend Ryder and your uncle as interesting side characters.

Viewed from a top-down perspective while in the overworld, Jack Move switches perspective to a pseudo-3D battle view when in combat. Battles are of the single party member variety, but the cyberpunk angle adds a few interesting twists to this formula, letting you tweak your software to change roles to be more offensive or defensive mid-battle. And as with any cyberpunk hero, you can also apply upgrades to grow stronger, and before long you’ll feel quite overpowered for most enemies.

Jack Move’s audiovisual presentation is worth mentioning as well – it features some lovely pixel art and the overworld of Bright Town feels vibrant and alive with lots of characters going about their way and quality animations, especially in battle scenes. The music also fits the cyberpunk mood well, and changes according to the situation at hand. It makes for a well-polished JRPG in a fun setting where our biggest issue was that it was over too quickly.