Developed and published by QUByte Interactive, the VASARA Collection brings two classic arcade shoot ‘em ups from Japan to the west for the first time. Vasara 1 and Vasara 2 are now out on a multitude of platforms including the Xbox One, PC and Nintendo Switch – but we’re reviewing it on the Playstation Vita and PS4.

Although it’s easy to forget, many classic arcade shooters actually had a storyline or at the very least a premise – and the Vasara games are somewhat unique in that regard. Blending elements of feudal Japan and its powerful heroes and warlords with futuristic sci-fi vehicles and weaponry also exist, it’s like a time machine experiment went wrong and spit out the Vasara Collection as a result.

Although you can play the Vasara games like regular shooters, the unique blend of Japanese history and sci-fi shooter also introduces mechanics that allow you to employ melee tactics that fit the sword-heavy era that is represented in the narrative. Hold down your standard fire button for a bit, and upon releasing it you’ll trigger a melee attack that doesn’t just hurt your enemies but also gets rid of the bullets that are near you. It’s a tactic that, after you meet your demise a few times with no apparent method of escaping the rain of bullets, you’ll quickly learn to appreciate.

There’s a stronger version of the melee attack as well, and its availability depends on how quickly you fill up your ‘Vasara meter”. Besides these two methods of attack, you also have a bomb at your disposal that will clear the entire screen or seriously hurt larger enemies. You get three of these per life, so boss fights (at least at first) quickly turn into you getting shot down and coming back to unload three giant bombs right away. Or maybe that is just how I play….

Either way, both of the Vasara games – to my knowledge the last two arcade games that Visco produced – are excellent shooters that add a tactical layer to a concept that many classic arcade fans know and love. They’re also somewhat recent (as arcade games go) with 2000 and 2001 release dates, which means that these are gorgeously detailed shoot ‘em ups as well.

The Vita and PS4 versions aren’t identical and aren’t available as cross-buy titles, but (compared to something like Dariusburst CS) it’s extremely competitively priced and the developer made great efforts to optimize each version to its system as well. 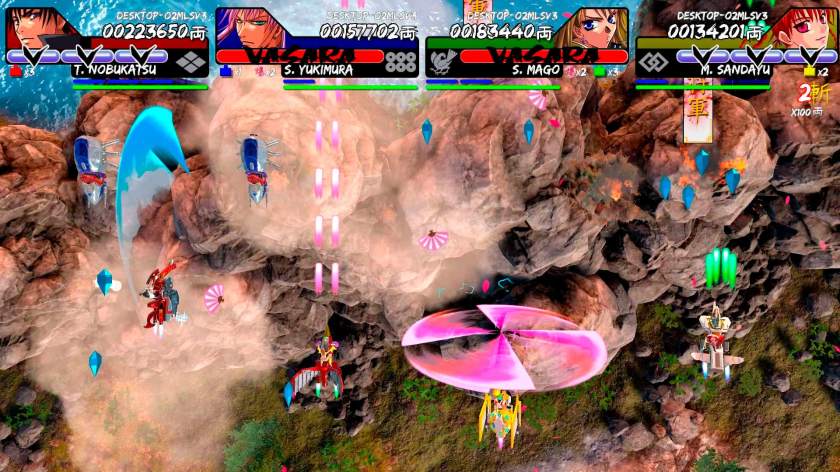 For the Vita, this doesn’t just mean that both Vasara games perform well on a technical level (it does, framesrates are smooth no matter how much is going on at once). It also means that Playstation TV-support was added, which is great if you still have one connected to your big screen – with the added bonus of adding local multiplayer support as well. Of course, the biggest benefit of Playstation TV is the screen size, because Vasara in its traditional view mode only reserves about a third of the screen for the game, which is very small on a Vita and can make it hard to navigate all those enemies and bullets. There’s a ‘tate mode’ that allows you to turn the Vita sideways as well, but this is a less comfortable method of controlling the game. Still, it’s admirable how far the developers went to adapt the game to the Vita, squeezing what they could out of it.

The PS4 version doesn’t need any trickery in terms of screen sizes and controls, but has another surprise up its sleeve. It comes with what you could call an HD remake/reboot of the original games called ‘timeless mode’. In this mode, the graphics are realized in crisp 3D and also support widescreen formats, completely eliminating the side borders you see in the arcade ports. This turns Vasara into a modern arcade shooter and it’s a great addition to the pack.

The Vasara Collection is a great slice of arcade shoot ‘em up action and well worth its modest asking price. The Vita version suffers a bit due to its small screen size, but Playstation TV support is a big pro if you have access to it. The PS4 version is a great example of a retro collection done well.