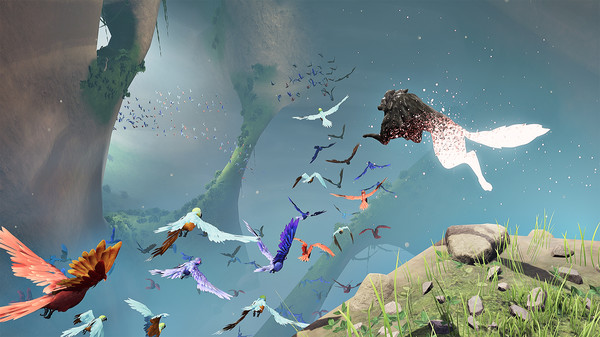 Developed by Mooneye Studios, Lost Ember is a gorgeous indie title with a dreamlike quality that’s coming soon to major platforms. Here’s why we’re looking forward to it.

The result of a very successful Kickstarter campaign, Lost Ember’s been in development for about five years now. It’s coming to PS 4, Xbox One and PC first, with support for the Nintendo Switch and VR headsets to follow at a later date.

In the game, you control a wolf who has the power to morph into/inhabit numerous different animals, instantly changing the way you look at (and move about) the world around you. You’re relatively free to move around, but your spirit guide will narrate the story for you as you go along, giving you pointers and telling you more about the backstory behind those who are no longer in the area you’re in.

In that sense, Lost Ember is also a bit of a mystery, taking place inside of a post apocalyptic paradise. Taking control of other animals allows you to take to the skies, go underground and find secrets that would otherwise be hidden to you.

We met with Mooneye Studios during Gamescom back in August to get some hands on time with the game, which was the first time we had seen the game in action after the screenshots and trailers that has come before. The demo allowed us to freely explore and experiment with the game’s mechanics for about half an hour.

Lost Ember looks every bit as unique and gorgeous in-game as it does in the trailers that are out there. The demo stuttered a bit during our playthrough, but we’re fairly certain this was because it was running on a laptop that was receiving notifications in the background. When running smoothly, it was a joy to explore the dreamlike world of the game with our wolf, climb to the top of a hill and then take off flying as we took over a nearby bird to help get to the other side of a valley.

While there is a narrative at the heart of the game, it’s mostly telling you about what came before rather than pushing you forward and telling you what to do. As such, exploration is a big part of the game, which plays out at a fairly leisurely pace even when you’re running around the place. The colorful world and distant vistas instill a sense of awe and wonder, making this a potentially great game for those who would enjoy some time away from the frantic action games that are so common.

The gentle pace, gorgeous 3D visuals and unique art style in Lost Ember also lend themselves incredibly well for a dreamlike virtual reality experience, so we can’t wait to try that out. It’s coming to PS 4, so let’s hope Playstation VR users get a chance to see the VR version of the game as well. For now, we already know that Vive and Rift users are in luck.