Melbits World, which was previously available for the PS4, is now out for PC and the Nintendo Switch as well. We played the Switch version – should you pick it up?

This wasn’t the first time we played Melbits World – we played the original PS4 version, which was part of the Playlink lineup that was released last year. We thought it was one of the better uses of the technology, and it’s sad that this year hasn’t seen much (or any?) new Playlink action.

A puzzle game designed for cooperative play, Melbits World features cute little characters that you have you help by guiding them towards the exit in each level. It’s a bit like the classic Lemmings in that sense, only here you control parts of the environment rather than the characters and their ability. Think elevators, switches, moving blocks – that kind of stuff.

It’s definitely easy to learn and hard to master, because in many cases it’s all about the timing of your button presses and getting it wrong will often knock down one or more of your characters – to either a lower part of the level or even to certain death. Do this too often, and you’ll miss out on the requirements for that particular level.

We also talk about the game some more in our original PS4 review of the game, but how does it translate to the Switch? The Playlink version uses smart devices (like a phone or tablet) to control the game with controls that visually change depending on the level you’re in or the role you’ve been assigned (one player can be controlling ramps, another a few moveable blocks). The controls on the Switch version are (almost ironically) more traditional in nature, but the gameplay remains entirely intact because the Playlink controls were always a little abstract in nature and they translate well to gamepad controls.

As such, if you were interested in the Playlink version but don’t own a PS4, then the Switch version is a sensible investment! 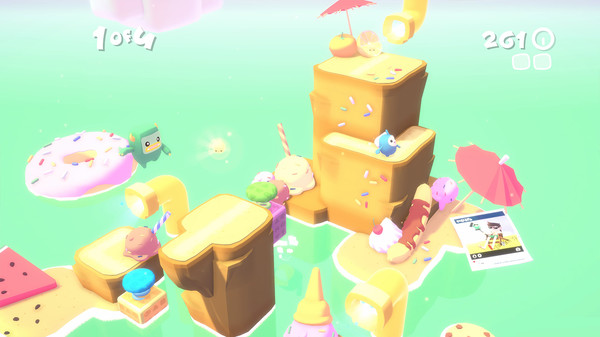