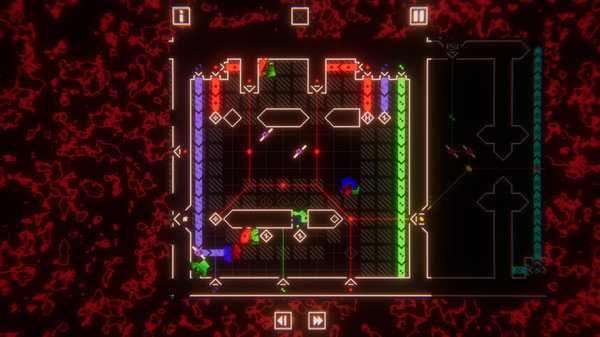 As we continue our journey past some of the exciting indie productions that are coming out in the next year, we stop at SOLAS by Amicable Animal, a 2D puzzle game with interconnected levels in which you (re)direct light beams to the rhythm of a synthwave soundtrack. We chatted with developer Tom Methven about the upcoming puzzler, of which you can already find a playable demo on Steam. If you’re interested in engaging with the development of the game, then definitely stop by the Discord as well.

How did you come up with the concept for SOLAS?

The beginnings of SOLAS came from the 2019 Global Game Jam. I was lucky enough to work with Steven and Jamesy (the sound and music guys on SOLAS) there, and we made this strange, short Tetris-like action puzzle game called HJEM, which was heavily inspired by the synaesthesia of Mizuguchi games like Lumines and Tetris Effect. Everything moved to the music, and it had this style and faint underlying sinister vibe I really liked. At the same time, I’d been batting this idea around in my head for a beam deflection game like Deflektor (from the C64 days), but I could never quite get it feeling good. After playing things like The Witness and The Talos Principle, I was really inspired to give it another go, and it turned out the rhythmic element was what it was missing. Changing from lasers to discrete pulses of light that moved to the music suddenly opened up so many interesting interactions and possible mechanics! At the time I was playing a lot of Zelda too, and I really liked how the dungeons made you think more about space and connections between screens, which felt like a perfect addition.

One major difference, I suppose, is that it all takes place in this single, interconnected world. I really like the idea that the pulses from the logo of the game at the very start propagate throughout every screen until the end, so you create this unbroken connection from start to finish. The fact that every pulse is always simulated, and is synced to the music, lets me do really fun things too! Puzzles can spill across multiple screens, or require you to understand the relevant position of one screen to another. The music helps keep that all in sync, and allows me to design puzzles around the timing of the pulses. Sometimes you want them to hit, sometimes you want them to avoid each other. Beyond that, I’m really proud that it is a game all about mixing and splitting colours, but is designed from the ground up to be playable by colourblind players. Every colour has a secondary way of identifying it, usually a special glyph, and those shapes add and split in the same way as the colours do. Beyond that, I really like the fact players can change the individual contrast of each colour to their preference too!

How were the visuals for the game designed?

Well, one of the very early aspects of the design was those colour glyphs. I drew a surprising amount of different options in a notebook before I went anywhere near Unity, even though they ended up as relatively simple shapes. But, once I had them, they sort of pervaded through the rest of the game, like this alien language. While those have stayed pretty static, the gates (the parts that emit and receive the pulses) have changed massively. They have to communicate so much information in a small space, so I was constantly tweaking them! The other part that I really struggled with was the visuals of the ‘glitches’ that appear in the world. I wanted them to feel… organic and very alien compared to the order of the rest of the game. In the end I created a cellular autonoma, a bit like Conway’s Game of Life if you know that, so the glitches really do simulate a simplified biological process.

You’re doing this with the HJEM team?

Early on I asked Steven and Jamesy to come on board as I really enjoyed working with them during the game jam, and it’s been an interesting process. I don’t think any of us thought the game would get this… big? But it’s been great to have them on board! As the game is so linked to the music and the sounds, lots of the effects end up getting iterated on. I’ll make a visual, Steven will make a sound that’ll give me a much better idea for the visual, which will cause him to tweak the sound… I’ve really enjoyed that iteration. Also, matching music to colour has been fun… it’s really hard to describe what you mean when you want the music to be more ‘blue’, so I’m probably lucky those two haven’t sworn at me too much. As for our publishers, it’s been an interesting journey. I was honestly so surprised they offered us a deal, and it took a while for me to adjust to having something else interested in SOLAS. They have been fantastically supportive and honest with me though, and the game is definitely better for it!

These interconnected puzzles must make for some interesting design challenges…

Oh, without a doubt the designing of the puzzles has been the most interesting for me! I love designing puzzles, but I’ve never built a game where I’m trying to teach all these complex mechanics wordlessly before, so it’s been a real learning curve. The simulation is quite complex under the hood, so most of my work is secretly trying to block certain situations that confuse players, while trying to direct them towards the right idea. But, of course, you want players to feel smart, while still having the puzzle feel fair, and that’s a hard balance. I’ve only recently realised that most of my favourite puzzles were designed backwards. I start with an interesting interaction in the simulation, and then design a puzzle where the only solution is to use that interaction… but due to the way the game is interconnected, I often have to go and put an earlier level in where I introduce that interaction in a simpler setting! That’s challenging, but so rewarding when you see players remember and reuse one of the tricks they’ve learnt. It’s like a little puzzle toolkit they’re building for themselves! 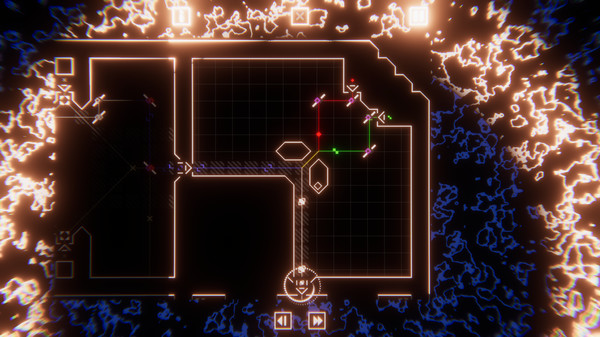 Were you affected by the pandemic in any way during development?

In many ways, I think SOLAS has been shielded from this at least somewhat. I was doing this in my spare time, around a full-time job, and mostly remotely already. As such, we’ve been progressing well, having just concluded the first major beta test, and aim to launch next year. The additional stress that I think many people are feeling this year, however, definitely did seep into the game itself. The game was always, in my head, about fixing things after some traumatic event, about rewiring something broken. I think this year I’ve really doubled down on that idea of the game being about fixing that chaos as best you can. That methodical fixing process has always helped calm me, to quiet some of my churning anxiety, and honestly that’s been invaluable this year!

I really hope that they enjoy exploring the strange space we’ve created, and that they get lots of ‘ah-hah’ moments! They’re always my favourite in puzzle games, where you’re washing up or walking and suddenly your brain interrupts with a solution, so I’d love to cause a few of those! Beyond that I really hope that playing the game will help distract people. I’ve loved spending time surrounded by the synths and neon glow, and I really hope other people enjoy spending time there too.