We covered the console port of Dustwind by Dustwind Studios and Z-Software a while ago, but recently caught up with the people behind it to discuss what it took to bring the game to consoles after its initial PC launch. Read on below.

How did the idea to develop a console version for Dustwind first come about?

For us it was a logical step. Many of our team are passionate console gamers. We had always thought and tinkered on the side about how we could reproduce PC controls via gamepad controllers. At some point, there was even a request in our Discord community to see if Dustwind was also available for console. And then we just did it. After a lot of discarded ideas and research on how to implement realtime isometric games with gamepad controls, we ended up with gamepad controls that are intuitively accessible to both beginners and hardcore gamers. And then the console port was already within reach. The fresh, gamepad-optimized UI then almost came naturally.

Dustwind originally had a strong emphasis on multiplayer mechanics – what prompted you to change this for the console version?

Indie games generally have a harder time building an active online community that stays active for years. Since our community tends to single player, we had implemented the single player campaign for PC. After the release, we noticed a lot of growth in the community. But most of them left the multiplayer and map editor rather unused. Many players just wanted to enjoy the campaigns and Skyrmish maps. Just start the game and play a quick round. And that’s exactly what we’ve prioritized for the consoles. Unfortunately, there was no room for a multiplayer mode for consoles.

What are some of the design decisions/changes you had to implement for the console port?

The fundamental design change was that we wanted to move from a mouse and keyboard based control concept to gamepad. Accordingly, all interaction concepts had to be questioned and redesigned for gamepad to ensure a smooth game flow for the players. In connection with this, completely new UI features had to be designed. Without a well-designed user interface in combination with the gamepad controls, it simply wouldn’t have been a well-rounded game. 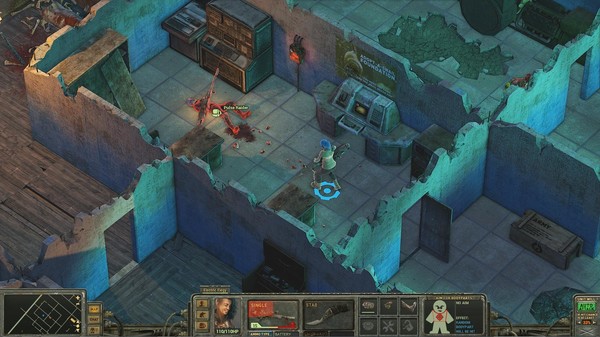 After we had optimized controls and UI for gamepad controls for the console version, we really wanted to add something new for the community at the same time. One of the long awaited features was a language update. So we used the time during the console optimization and added the ten most popular languages as we worked towards the release of the console version. So that the innovations are also tangible and comprehensible, this was then rounded off by fresh, new artwork and various bug fixes for the release.

We have not yet been able to integrate the multiplayer and the map editor known from the Steam version of Dustwind. So if you want to play a round of Dustwind with others or create your own Skyrmish maps, you can only do so in the PC version. But take the opportunity and come to our official Dustwind Discord server and become part of the community:
https://discord.com/invite/bZRQrzB

Console-specific features require more resources for each platform. Since we are only a small development team, we focused our porting efforts on making Dustwind play well on consoles. By the way, Dustwind – The Last Resort also supports next-gen consoles. So you can at least notice a difference in the game quality between the different platforms. In addition, we’ve included some minor differences, for example, in the Achievements between the versions. And it’s a nice feeling that these smaller differences are noticed in the community.

How did you approach the control scheme for the game?

First, we looked at various other realtime isometric games and understood how the control concepts were implemented there. After this market research, it was then a matter of tinkering and trying out what fits Dustwind from the processes and control concepts. After a lot of trial and error and countless control concepts, we found a technical implementation that guarantees a smooth game flow and is fun to play. After that we had to find a suitable UI, which fits into the setting of Dustwind.

Which console-specific challenges did you run into during the development of the console port, and how did you overcome them?

Fortunately, we have already developed and published several games for consoles. Therefore, we ran into fewer problems or were familiar with certain processes and structures. However, thanks to our focus on simply releasing awesome realtime isometric games for console, it was all quick and easy to work through. Because the only thing we wanted was for the gameplay of Dustwind – The Last Resort to be fun on console and for the controls to work with the gamepad.