After recently covering SpellMaster: The Saga from publisher Valkyrie Initiative, we were curious to see how Buccaneers!, which was developed by Skyward Digital, would turn out. SpellMaster ultimately felt a bit too ambitious for its good and fell a bit short of what it set out to do (pay homage to the Gothic series), so we were glad to see that Buccaneers! turned out to be a more than competent take on the classic pirates-based gameplay we first fell in love with in the 1980s while playing Sid Meier’s Pirates!.

What makes Buccaneers! work is that it feels stripped down in many areas, going with simplicity rather than trying to simulate a complex economy (see Port Royale) or trying to be a Sea of Thieves clone. Sid Meier’s Pirates! was a much simpler game, and judging from that exclamation mark in the title that’s what the developers were trying to channel here as well – though there’s a story-driven element to Buccaneers! that makes it less sandbox-like.

Aligning with either the English, the French, the Spanish or the pirate faction, you’ll enjoy the perks that either side offers – the English being good at cannon-based warfare while pirates are great at man-to-man combat, for instance. Upgrades will help alleviate some of your faction’s shortcomings over time, but having a distinct identity for each faction is nice. Missions are then given out by Governors on the islands you visit, and get gradually more challenging over time – from simple observation tasks to taking over entire port towns. But while these towns can be visited, the only really meaningful interactions are with these Governors (for missions) and the shipyards, where you can buy and apply upgrades – making a ship faster or more powerful in the process.

When on the high seas, you’ll notice that crew management is very much simplified. In combat, your crew will load cannons for you, but it’s up to you to aim and fire them – making for an almost arcade-like experience when battling with other ships. The same goes for navigation, which is simplified through the use of an in-game map – letting you easily head to new ports to accept new missions and repair any damage before heading out on a new one. The latter is important, as although combat is often easy enough you can find yourself losing badly if you go into it with a few damaged ships. 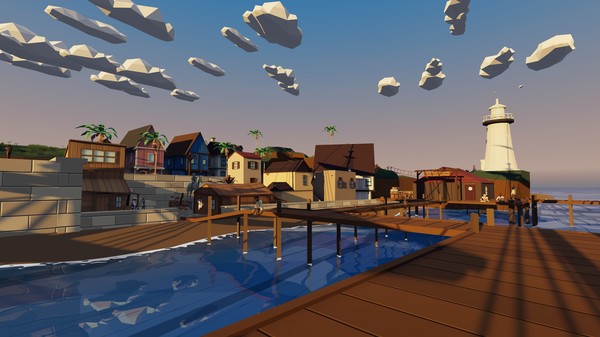 That’s pretty much the loop in Buccaneers!, but it’s as addictive as it ever was and the story/mission structure keeps things interesting. The visuals, with their low poly look, match this simplified approach, and although those looking for a lot of gameplay depth might be underwhelmed this one, it did succeed in taking us back to when it a simpler time for those wanting to be pirate.

Icy cold circumstances and horror have mixed well ever since they were tackled in Lovecraft’s work and, for those more cinematically inclined, John Carptenter’s The Thing. Expedition Zero, from developer Enigmatic Machines and publisher tinyBuild, is the latest videogame to tackle this combination, and comes away with mixed results.

One thing that seems to be commonplace in this very specific subgenre is a strong sense of atmosphere, and the first person survival horror title that is Expedition Zero delivers on this front. Set inside an anomaly zone in Siberia, your mission is simply to survive – which means both evading the dangers that lurk there and making sure you don’t freeze to death in the process. And while there are occasional jump scares, it’s this constant lingering fear of death that makes for a strong setting.

The survival horror scene is a crowded one though, and the problem with Expedition Zero is that it’s not that fun to play because of awkward controls, which seem unresponsive – especially when using a gamepad, for which support is lacking (in what is currently a PC exclusive). While this doesn’t have to be an issue in a game that emphasizes a sense of dread, this one also has more than a handful of sequences where sluggish controls cause frustrations because you feel like you can’t properly react to what’s going on – whether that’s combat or a stealth sequence.

It’s a shame, really, because Expedition Zero ticks a lot of the right boxes for a survival horror title. The atmosphere is excellent, resources are extremely hard to come by but very important, and the harsh cold makes you want to push on to safety – but only to be halted by gameplay that needs a bit more polish. If this had been released in Early Access we would have considered to be a title with a lot of promise, but as it stands we’d recommend checking to see if the game’s been updated post-launch before you dive into it.

When you consider the widespread appeal of car racing games, it’s surprising to see how many motorcycle racing games get released. Between franchises like MX vs ATV, MXGP, Moto GP, TT Isle of Man and Motor Energy Supercross, there’s plenty to choose from, and Monster Energy Supercross 5 just released – does it innovate within a crowded scene?

Content-wise, things aren’t all that different from Monster Energy Supercross 4, which we reviewed last year. The biggest change seems to be that the developers have become more self-aware about their game not being the most newcomer-friendly racing game out there, as the tutorial is much better this time around. It’s more detailed, breaks up the different ins and outs of Supercross racing and attempts to ease you in much better this year – although ultimately this is still a very challenging game to play and not one you can casually rush into. 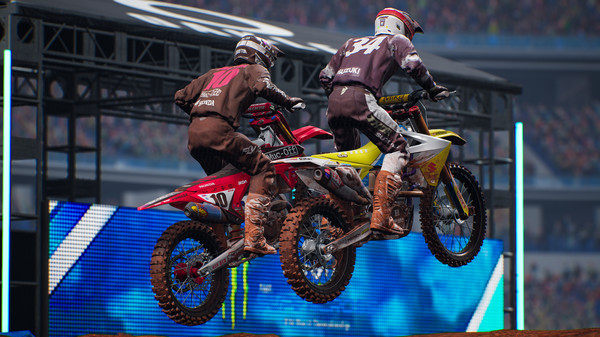 Spend time with it, or upgrade from last year’s version, and you’ll find that the game is a lovingly crafted racer with tons of attention to detail in its racing mechanics. Finding a stable balance is key to staying fast, and redistributing your weight as a rider is crucial if you want to make it past tricky jumps with your speed and bike intact. If you enjoy the more arcade-focused approach of games like MX vs ATV, this one isn’t for you.

We were surprised and a little disappointed to see that the career mode hasn’t been fleshed out much since last year’s game, although we enjoyed the elements that are geared towards keeping your rider in physical shape – something that offers a nice diversion from the regular racing while also tying in the importance of the physicality in the racing model. 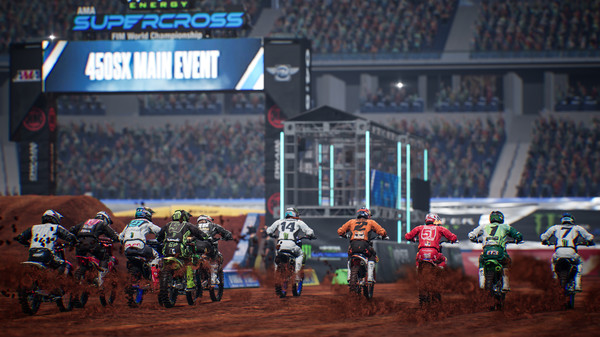 And while we really enjoy the DualSense support on the PlayStation 5 – which is a great fit for a racer of this type, with radically different surfaces to race on, the game feels very similar to last year’s game from a technical perspective. The visuals haven’t been given a big boost, and with other racers pushing the envelope more this is something to focus on for the developers at Milestone over the next year or so – we’re curious to see what Supercross 6 will bring to the table.