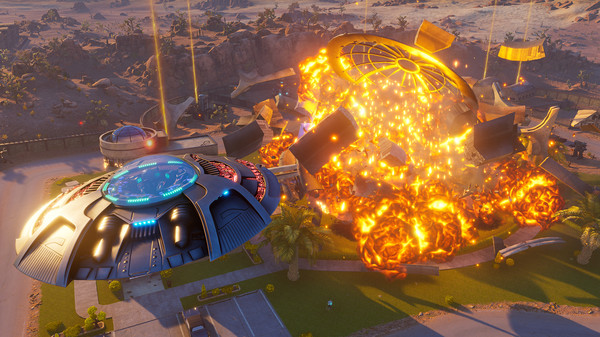 THQ’s remake of Destroy All Humans! has landed on earth and is available for PC, PlayStation 4 and Xbox One this week. We checked out the PS4 version.

I think one of the reasons that the original Destroy All Humans is remembered fondly is the way it captures that sense of a cheesy sci-fi b-movie look and feel – not taking itself too seriously among plenty of other sci-fi themed games that do. Even with gameplay that was never groundbreaking to begin with, it had a kind of retro charm to it that made me eager to play the new remake.

Of course, the original games have also been released on this generation of consoles, but those were remasters rather than remakes. Besides a visual overhaul that makes it more in sync with modern graphics, the 2020 version of Destroy All Humans also features a number of gameplay tweaks to accommodate modern sensibilities.

The backstory is the same though – you play as Cryptosporidium-137, a little alien who is hell-bent on the destruction of earth and humankind after a fellow alien crash lands on our blue planet. You can go crazy with this once you tackle the game’s story missions first, but until you do you have to follow each scenario’s objectives. This keeps you on point, while also gradually introducing you to new gameplay mechanics. Having said that, Destroy All Humans is definitely one of those games that benefits from the ability to quickly jump in and do a bit of free roaming once you’re done with the campaign.

What’s nice about the campaign is that things scale up and down quite nicely, with large scale destruction being possible with the use of your flying saucer while you can also try to blend in with humans and move around unnoticed for a while. To do this, you can even disguise yourself as a human after scanning them. Think of a comic book equivalent to the T1000’s ability to morph into humans and you’re halfway there.

Besides the core objectives, missions also contain additional challenges that you can either tackle right away or try to do in a subsequent playthrough of that mission. Completing missions and challenges also gives you access to upgrade paths for your weapons and abilities, and although Destroy All Humans certainly isn’t the hardest game out there it helps as the difficulty level gradually grows.

What keeps the game from being overly difficult aren’t just these upgrades, it’s also that the game’s controls have been overhauled and improved to be more in line with modern takes on the action game genre. I remember the original (as well as the remasters) being somewhat clunky in this area, so it’s nice to see that this was revamped for the remaster. The mission designs themselves show their age though, often hinging on a single mechanic and not giving you much room to make choices of your own.

Although it’s a remake of a fifteen year old game, the developers have added additional content as well. There’s a new level that was lost on the cutting room floor back then, but the biggest difference (content-wise) can be seen visually. Not only did they ramp up the visual quality significantly, they’re also using the additional horsepower to make the game worlds more populated and alive than they were back in the day. The audio didn’t receive the same treatment though, as many voice samples sound like they were lifted straight from the original Xbox version of the game.

The end result is a fun trip down nostalgia lane for those who fondly remember the original game and something that feels it has dated mechanics inside a modern exterior for others. Then again, “retro” certainly is a thing and the entire campaign takes place in the 1950s anyway…