It’s time for a trio of ports in our next Indie Roundup, as we look at the PS4 ports of Rainswept and Lost Wing by 2Awesome Studio and the Vita version of Steam Tactics, which is also available for the PS4.

Originally developed for the PC by Frostwood Interactive, Rainswept is one of those games that demonstrates how the indie scene can bring titles you wouldn’t normally expect on a PlayStation to a console screen near you. Steeped in the long tradition of narrative-driven adventure games, Rainswept was very successful when it launched on Steam a year and a half ago, and now we’re able to play it using a PlayStation 4.

The game is a detective thriller that focuses on Michael Stone, who heads to a town called Pineview in order to help solve the mystery of a dead couple rumored to have had relationship struggles. The perspective in the game regularly shifts as well, as you not only explore this unsolved case but also dive into the former lives of the two victims at the heart of it. 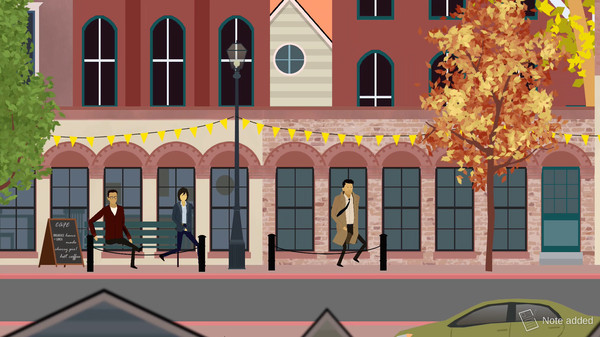 It’s easy to see where all the critical acclaim and positive player feedback for the game came from, because the way the narrative is delivered is absolutely great – perhaps more engaging than what you can experience in a Telltale game, which has become a bit of a standard in the narrative adventure genre in the past decade or so. The shifts in perspective and the mystery greatly add to the storytelling, as do the moody and atmospheric visuals.

Sure, visually Rainswept looks more like something that could have also been developed for mobile platforms rather than the gorgeous 3D of games like Blacksad (or indeed the Telltale games), but Frostwood’s adventure is so rich in atmosphere that you’ll soon forget that it’s not trying to look “next gen” in any way. There’s an excellent soundtrack supporting the game though, which certainly adds to the experience much in the way a good music track for a movie does. Definitely recommended if you’d like to play something a little different and enjoy watching a good detective thriller.

Lost Wing has been in Early Access on Steam for a while now, and this BoxFrog Games-developed title is now coming to PlayStation 4 thanks to 2Awesome Studio. Best described as a mix between an endless runner and a rail shooter, it features fast and furious action. 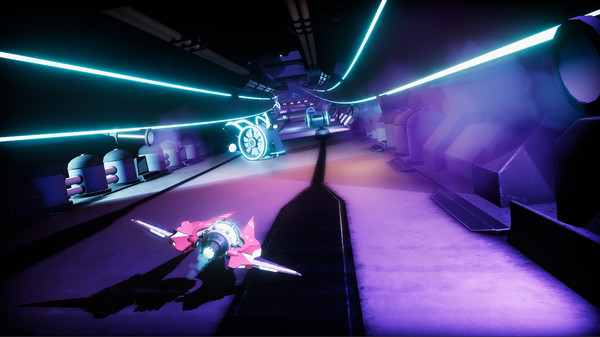 The game doesn’t waste much time in letting you know that it’s challenging – extremely challenging. Where traditional arcade shooters let you carefully learn the patterns of a level, your ships in Lost Wing blasts forward at an unrelenting speed – forcing you to quickly evade obstacles in your way and take out enemies with a limited amount of shots. You can temporarily slow down time, but the only real break you get from these breakneck speeds is when you encounter one of the game’s bosses.

These fights feel more like a traditional arcade shooter – though with a 3D perspective. Weaving around their incoming attacks, you gradually deal damage to these huge opponents and slowly but surely take them down – which is a big portion of your ultimate score, which you can compare to others on the in-game leaderboards.

Visually, Lost Wing takes place in a striking sci-fi themed environment with plenty of neon-infused scenery. Most of the backdrops are relatively dark, making the colorful lighting effects really pop out. The game itself also feels a bit like a modern day version of games like Microcosm, for those who remember that. The punishing level of difficulty isn’t for everyone and some of the game’s assets repeat themselves a little too much, but fans of challenging shooters should definitely give this one a look.

First released on Steam and now ported to the Playstation Vita and PlayStation 4 by Sometimes You, Steam Tactics.

The game features a steampunk narrative with fantasy elements that revolves around a squad of airship pilots trying to help out their gravely ill king. Most of the story elements are presented through visual novel-like stills and the narrative is largely generic and forgettable, with the emphasis being firmly on tactical turn-based combat that’s accessible and from that perspective a perfect fit for the Vita.

While playing, you can level up your crew members as well as their ships and weapons, making the option to replay a level at a harder difficulty level suddenly a feasible one. The actual combat scenarios take place on small grid-based levels that you see from a top-down perspective, with the main dynamic being the way your ship attacks. For example, one ship has the ability to attack enemies two squares above, below or to the side of it – while another can only attack enemies positioned diagonally from his own spot on the grid.

Carefully moving your units around is crucial to success, and almost like an accessible form of chess. The dynamics are easy enough to understand, and rounds are generally over quite quickly. The counter-argument there is that, as turn-based strategy goes, Steam Tactics isn’t the most involved or deep game out there, but as a game that’s easy to get into that perhaps would also work great as a mobile title, it works.

One downside of the Vita version is that, with the graphics being scaled down in size from the PC original, the text has become incredibly small and hard to read. It’s definitely doable, but not comfortable. 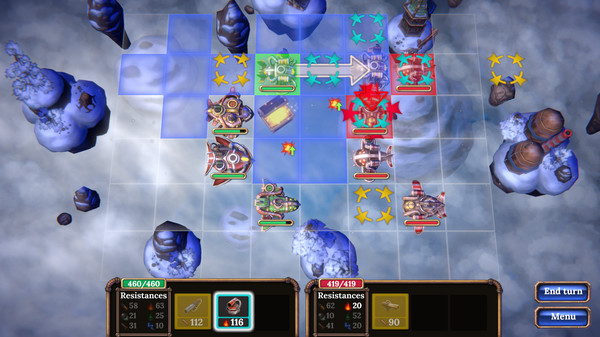