Trade show season is always full of new announcements and upcoming hits, but this past week we also saw plenty of games re-appear on new systems. Time for a look at five recent ports, as we check out the remastered version of Quake, Traffic Jams on PSVR, Pretty Girls Panic!, Alveole and the PC release of Cookie Clicker.

We may all consider Doom to be the granddaddy of all shooter games, but PC gamers in the 1990s probably remember Wolfenstein 3D and others as earlier examples, and they will likely also remember the launch of Quake, which was billed as the first “true 3D” shooter out there – making the likes of Doom feel rather dated by comparison. The game is 25 years old now, and iD and Bethesda have revived it for a current-gen release with a free next gen patch on the horizon.

Obviously Quake isn’t as visually impressive as it was back in 1996, but it’s quickly apparent how it was a massive leap forward when you play it next to the also re-released Doom and Doom 2. Quake was iD’s first game where you could actually look upwards and downwards, and visually you now had arches, pipes and other forms of geometry that were much more complex than the corridors and rooms of Doom.

This new version of Quake also lets us play the game in split-screen multiplayer, which is a rare treat for those who enjoy shooters but also want to have couch multiplayer as an option. It’s in Quake where you can also see the foundations for what later became the kind of verticality we seen in present-day games like Doom Eternal – letting you jump over a ledge and aim downwards at an enemy to take him down before you even hit the floor.

The developers also really enjoyed playing around with their new toolkit, as Quake’s many traps show us. The game had a fantasy/medieval look to it which results in plenty of grey and brown tones, but you also get a ton of deadly traps to avoid in addition to the enemies you have to take down. And while your weapons aren’t as iconic as those in Doom, there’s a great range here as well.

On modern consoles, Quake now supports 4K support (the system requirement for which is a PS4 Pro or PS5) and widescreen resolutions, as the original was released in the 4:3 days. The game’s still 25 years old and a few new lighting effects won’t change the fact that it looks a little dated, but it’s admirable that work was put into technical features like these instead of releasing the game as-is.

Content-wise, you get the same game as before, but there is additional single player content as well, including a brand new expansion never seen before and support for user generated content. And yes, unlike other remasters, Quake comes with its full soundtrack intact, which means that the (at the time) heavily promoted Nine Inch Nails music is present and accounted for. Quake might feel like a product of its time, but it’s an iconic example and this version is a steal when you consider its budget price point and all of the work and content that went into it.

Traffic Jams directs itself to PSVR

We did a full review of Traffic Jams a while ago, based on the Quest version of the game. Now, the game is available for PSVR users as well and it’s every bit as fun. It’s a great fit for the platform, and the PlayStation Move wands are great tools for pointing at people and telling them to move as you direct busy intersections in locations like Amsterdam and New York. 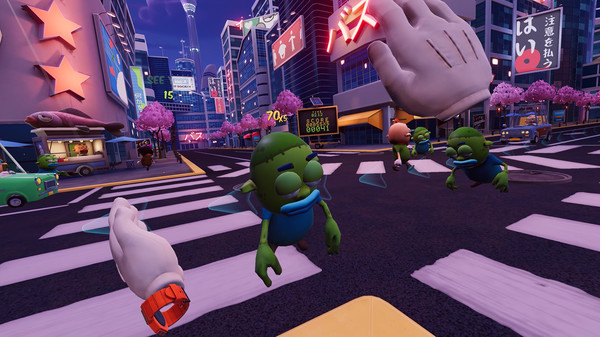 It’s still wonderfully intuitive, because after you point you can lift the controller to tell people to stop, or beckon towards you to tell them to go – and do it faster if you want them to hurry up. Obviously a fun way to play is to cause absolute mayhem as people start moving from and in all direction, but ultimately the goal is to not cause crashes and prevent drivers from honking at you for making them wait too long.

Once you get better and more comfortable, you can rack up high scores and unlock subsequent levels – all of which can be played in daytime, night and rush hour modes. At night zombies come out (and can be directed into oncoming traffic!), and the game has other fun little surprises for players as well. Giant kaiju monsters can wreak havoc on your little intersection (I’ll give you one guess as to where this takes place), and the sense of scale that VR provides makes this a lot of fun. On top of that, you can also play local multiplayer with non-VR friends who play with their smartphones on the same network.

We’re also still eagerly anticipating Vertigo’s After the Fall, but having Traffic Jams on PSVR is a great way to pass the time if you missed out on the earlier Oculus/PC release.

This one originally launched almost five years ago on PCs, but has now been released for consoles thanks to publisher Eastasiasoft, who picked it up for a release on all major consoles after previously giving us other “Pretty Girls” titles.

Pretty Girls Panic! isn’t based on a card game, but does feature familiar gameplay mechanics – essentially copying the formula that was made popular by the likes of Qix and Volfied in the arcades. Combining that with anime girls isn’t new either, as the recently reviewed Bishoujo Battle Cyber Panic! essentially did the same thing – and both are similar to Gals Panic.

Mechanically, this isn’t the most refreshing or original take on the genre, and the game’s 50 stages can be completed in less than two hours. As such, it’s a quick and easy way towards a few new trophies, but the main draw here is the Pretty Girls license, as freeing up parts of the screen reveals more and more of the picture underneath. You’ll see each girl four times in different outfits, but if the anime aspect isn’t a huge draw for you then it will feel formulaic and the main pull will be the easy trophy list.

Alveole is out now on PlayStation 4

It could just be us, but we have the sense that a lot more experimental type of games are heading towards PlayStation these days – often conversions of games that launched on Steam earlier. Alveole is one such game, and was designed by Emil Ismaylov and Denis Petrov as a minimalist puzzle game with experimental gameplay features. It’s been ported to the PlayStation 4 by Sometimes You, and is fully compatible with the PS5 as well.

If you like games that are on the far end of the “unique” spectrum, then Alveole definitely fits the bill. It’s a short experience that can be completed in under a half hour, and during that time you’ll be collecting photographs through highly abstract (to the point of being vague) visual puzzles. The solution’s often quite clever and creative though, so this is one to check out if you previously enjoyed games like Wurroom.

If you’re familiar with casual/idle games for tablets and mobile devices, then you’re probably heard of Cookie Clicker. Originally designed by Julien Thiennot, it was first released as a browser game back in 2013 and an Android version followed last year. It’s been wildly popular ever since the web-based original, especially among younger players, and now there’s a Steam version that’s launching this week.

Functionally and content-wise, the Steam version doesn’t offer anything that we haven’t seen in previous iterations, but it (obviously) does add mouse support and all of the post-launch updates that the game has seen over the years. This means that you have access to hundreds of upgrades and achievements, which magically keeps you clicking away at cookies just to get access to the next thing that’s in your reach. When you add mini-games and permanent upgrades to the mix, Cookie Clicker is a lot more mature now than it was when it first launched. And if you’re not into playing on a touch screen (though that seems like the most natural fit for a game like this) then at least you can now see what all the fuss is about without leaving your trusted Steam environment.