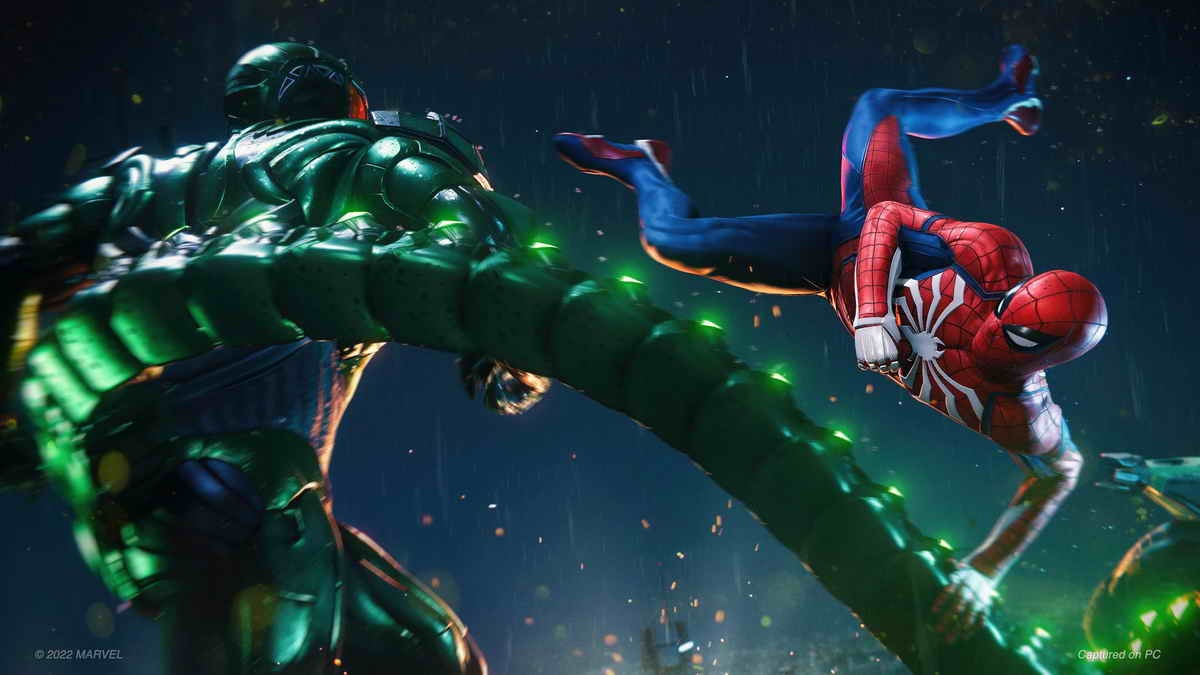 Sony’s move towards re-releasing some of their top titles for PC is great. The PS4 was home to some of the best games ever released, and seeing those come within reach of PC gamers is a delight to see. The Remastered version of Marvel’s Spider-man is the latest game to get that treatment, and not having played the Remastered version on the PS5 yet I was eager to check it out.

I did play the original PS4 release though, and thought it was brilliant. To my surprise, the remastered version is more than just a technical boost with higher resolutions and things like that, as it also features a new look for Peter Parker – with a face actor that more closely resembles Tom Holland. Not really needed and a matter of personal preference I support, but probably a plus for those coming in from the recent films. You also get all the post-release DLC that was published for the original game, so there’s no need to purchase additional content.

Of course you also get all the usual technical benefits, like higher framerates and resolution support. If your rig can handle it, you can also turn in ray-tracing, and if you’re not using the very latest graphics card you can enable DLSS for a performance boost. The PC version even supports the DualSense controller, so in a way I was finally able to play that PS5 version I hadn’t checked out yet.

What’s surprising is that Spider-man Remastered even runs on the Steam Deck – offering a glimpse at what a Vita follow-up from Sony could have given us. Bittersweet in a way, but being able to run such a stunning game at stable (30+ fps) framerates on a handheld is great, even if you obviously can’t go for the max settings that way. The difference with that Amazing Spider-man game for the Vita is like night and day. Obviously it also looks great on a regular PC, and even on a modest GTX970 the game played very well. If your gaming PC is less than five years old, you’ll want to play this one.

When QUByte announced the Thunderbolt Collection as the latest release in the ‘classics’ line, our minds went to the oft-forgotten Operation Wolf follow-up Operation Thunderbolt, and we were ready to engage with some lightgun action. This is a bundle of two classic vertical-scrolling arcade shooters though, and it’s available for all major consoles right now.

With that in mind, it’s also the first release in their “classics” line we weren’t familiar with yet, and after a bit of research we figured out why that was – both games were originally released as bootlegs in Asia and never saw western releases before, so they’re definitely niche titles. Not how we’d define “classic”, but if you’re interested in checking out NES and Mega Drive/Genesis games that you weren’t familiar with then this could be right up your alley.

But while the emulation works fine, as we’re used to with QUByte releases, the games themselves aren’t great. From the gameplay to the audiovisual presentation, these aren’t titles that we’d consider must-haves, and these are best suited towards those who consider themselves collectors or die-hard fans of the genre. For anyone else, we’d like to suggest something like the Darius Collection instead – though this Thunderbolt Collection at least has its budget price speaking in its favor.

The original Toy Soldiers was one of our very first digital games, back on the Xbox 360. Toy Soldiers HD brought the game back last year with releases for PC, Xbox and PlayStation, and now it’s coming to the Nintendo Switch as well. It’s in the final stages of development, but we were already able to go hands on with it.

Toy Soldiers HD doesn’t just feature a bit of visual polish, but also includes the DLC that was launched for the original game – which was a personal treat as I’d never tried it out before. And for those who never played Toy Soldiers before, you’ll be surprised to learn this isn’t the action game it looks like in screenshots – there’s a surprising amount of strategy involved as well, even though you can also jump in and join the action yourself.

The strategic elements come from base building and defending, and there are a lot of different (defensive) structures to choose from. It’s a lot like a tower defense game in that sense, and you’ll also notice that enemies come at you in waves. Pretty standard stuff, but well executed, and the ability to dive into one of the game’s vehicles is great as you actually feel like you can have an impact on the tide of the battle – which is especially fun in multiplayer.

Toy Soldiers HD definitely isn’t the prettiest HD remake out there, but on the Nintendo Switch it looks just fine and it performs well – even in handheld mode. For a game that we enjoyed so much back in the day, that’s really all we need. Online multiplayer is far more common now than when Toy Soldiers first launched, so let’s hope for a new entry in the franchise as well. For now, however, we’re taking this one on the road for some competition when it fully launches and the multiplayer environment starts filling up.